In the midst of a generation caught in racial crossroads, Americans of all ethnicities, social classes and demographic backgrounds have sat and waited for the next social activist to emerge from the shadows of men like Martin Luther King Jr. and Malcolm X. We as a society have not seen anyone even in the same league as those men – perhaps excepting individuals like Oprah Winfrey or the late great Tupac Shakur – in the past 15-20 years. The question is raised as tensions and conflicts escalate: When will the wait for the next great social activist be over?

Last January, we may have gotten our answer in the emergence of Compton-raised hip-hop icon Kendrick Lamar. With the release of his third studio-recorded album, “To Pimp a Butterfly,” we got a glimpse into this lyrical genius’s ability to use his power and influence in the music world productively to address our generation’s most controversial issues. Lamar does not back away, but rather steps up to the plate and addresses the political, economic and most importantly, social issues plaguing our country head-on. His album was released amidst the social justice movement that unfolded after the deaths of Michael Brown in Ferguson, Missouri and Trayvon Martin in Sanford, Florida.

Two weeks ago, at the 58th Annual Grammy Awards, we were reminded by the splash Lamar made at the awards of his continued acceptance and embrace of his label as the “next great activist” for social and civil rights among lower and middle-class minorities. Once again, he did not back away, but rather confronted the real issues of our society, especially relating to the continued discrimination toward African Americans in our current American institutions. He made a statement by performing his hit songs, “Alright” and “The Blacker the Berry,” in a prison jumpsuit and chain-ganged with others following in suit behind him.

In addition to this revolutionary performance and historic year in music for Lamar, he leaves us with a much more important problem to consider – a problem based around the idea that inequality is still prevalent in our society today and that discrimination is still at the forefront of our world. The answer to this problem, Lamar promotes, is giving back to low and middle-class citizens worldwide and in places like his hometown of Compton, California. He spreads the idea that until we learn that we are put on this planet to love and accept each other, we will never be able to move forward successfully as a society. I’m not sure whether Kendrick Lamar is the next legendary, transcending social activist in our generation yet, but his actions sure do show his drive and willingness to take on the role. 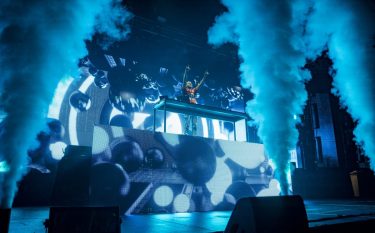