At last, mental health is being supported on campus and even getting a monetary boost.

However, that doesn’t necessarily mean that the money is going toward the right proponents for this sensitive subject matter.

A few weeks ago, Student Government teamed up with the school administration to unveil two napping pods that cost $9,000 each.

Yes, I did, oh inquisitive reader. Napping pod: a contraption formed by a protruding green mat engulfed by a white sphere that covers your upper body. Or, an albino Pac-Man sticking his tongue out at you.

We have two of these now, one in the University Center and one in the Shalala Student Center, to go along with a brand-new $2,000 massage chair.

As far as impacting mental health, I can’t complain too much because these definitely won’t hurt the cause. They will certainly help tired students relax while having their laptops stolen.

However, these purchases sound more like something school reps can boast about during a school tour rather than real catalysts for emotional stability.

You’re more likely to hear a P100 tour guide proclaim, “We care so much about mental health that we invested in brand new technology called napping pods,” than, “We have a counseling center … somewhere!”

Again, it’s laudable that we’re making an effort. I’m glad Student Government is trying. As a resident assistant approaching three years on the job, I have seen hundreds of students succumb to stress, ranging anywhere from struggling with organic chemistry to forgetting a towel the one day the Wellness Center checks.

But since so many students are stressed out, why not use that $20,000 to buy a lot of something smaller so we can broaden the impact radius?

Or how about installing 100 hammocks around campus? We pitch hammocks during finals, so I know some higher-up believes that they increase morale.

Sure, it wouldn’t sound as enticing on the school tour if the guide had to say, “We have 100 hammocks on campus – don’t shine a black light on them.”

But at least it could help more than 100 students at once as opposed to just three. We have 10,000 undergraduate students – we should be thinking numbers here.

Furthermore, hammocks – or even more gliders – would encourage interaction between students because they can study together in them or watch the new season of Kimmy Schmidt on their laptops. Napping pods promote tackling stress alone, but 20-minute naps can’t cure stress as well as friendship can.

At least we’re taking a step in the right direction in terms of building an arsenal of weapons to combat college stress levels. But it’s just that – you need more than two tanks to fight a war. 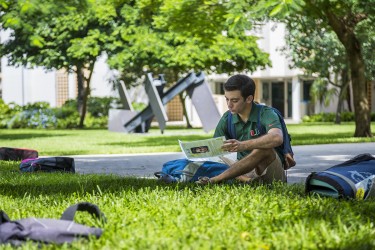