In September, I wrote a column predicting that Martin O’Malley would be the most competitive challenger to Hillary Clinton in the democratic primary. The pattern of recent presidential primaries has been that the more ideological candidates get a swell of support in August and September because only the most energized bases are paying attention so far ahead of primary season. Four months later, on the day of the Iowa caucuses, the opening games of presidential primaries, I am eating my words. The 2016 election is playing out very differently than what we’ve seen before. Martin O’Malley is all but out of the race, Clinton is wavering and Democrats are really feeling the Bern.

Bernie Sanders had a breakthrough during NBC’s Jan. 17 Democratic debate. His popularity had been growing, which gave him the confidence and the platform to completely monopolize the conversation. Bernie actually had more speaking time than Clinton, the longstanding frontrunner. According to prophetic presidential statistician Nate Silver, who aggregates polling and endorsement data on his platform FiveThirtyEight, Sanders was only trailing Clinton by 5.3 points as of last night although he is ahead in certain polls. Silver also gave Sanders a 27-percent true chance of winning Iowa, more than one would expect for such a far-left candidate.

Why is an ideological candidate like Bernie doing so well? Some have said that because this election is playing out more over social media and less through traditional community mediums, candidates have been unable to adapt quickly. By its very nature, social media skews politics toward the extreme ends of the spectrum; its algorithms select stories that are compatible with the viewer’s ideology.

But while there is a huge element of confirmation bias in social media, this phenomenon is not solely attributed to the way people receive media. It is also about the basic approach Americans are taking to politics today.

A political science professor of mine recently suggested that there is a certain comfort in disorder, a soothing aspect of having political or security crises that need immediate solutions, which might have something to do with the abnormality of this election cycle. This idea is the key to understanding 2016.

According to Gallup polls, during the last presidential election in 2012, more than 60 percent of Americans cited the economy as the most important issue, but as of early January 2016, only 27 percent cite economic problems as their biggest concerns. Even more striking is that no other major problem has come to replace our collectively most pressing issue. The next most salient issue, dissatisfaction with government, was the top concern for only 17 percent of people polled.

American’s top interests have diversified since 2012, because basically, the United States is doing pretty great. Since August, Americans have been at “full employment,” defined as between 5.2 percent and 5 percent unemployment by the Federal Reserve. Previously mobilizing social issues like marriage equality and equal pay have been cemented in legislation, tapering off culture wars. President Obama’s foreign policy has brought countries we used to fear like Cuba and Iran into official relations. Americans are worried about having no worries, no currently unanswered questions. The uncertainty of what the next central problem will be is far more unsettling than acknowledging the problems that have already been solved.

The rhetoric of ideological candidates like Bernie Sanders, Ted Cruz and Donald Trump is that there are things deeply wrong with the American system. They convince us that there are massive underlying problems that we should feel uneasy about. Bernie’s political revolution on the left and Trump’s “making America great again” on the far right appeal to this desire for disorder.

Centrist candidates like Hillary Clinton, Jeb Bush and Marco Rubio, on the other hand, are just saying that they will keep things functioning and continue the good work of the previous president or Congress, respectively. In practice, centrist policy proposals are more appropriate and realistic for the progress of the country. Unfortunately, their more realistic perspectives are not politically appealing to voters.

There are still new developments that wait for us ahead as the concrete results start rolling in tonight. Maybe Hillary will win and squash Bernie’s current spotlight; maybe Bernie will win Iowa and go on to even greater success in New Hampshire; maybe readers of this column will spread the word that this ideological support is just a psychological phenomenon and not a realistic way of viewing political issues. In any case, I can see why Sanders is having a moment in the spotlight and I would not be surprised if people were still feeling the Bern well into the primary season. 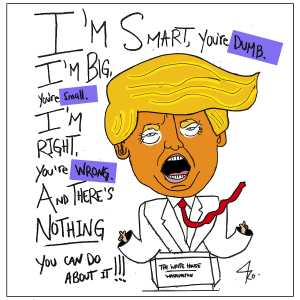