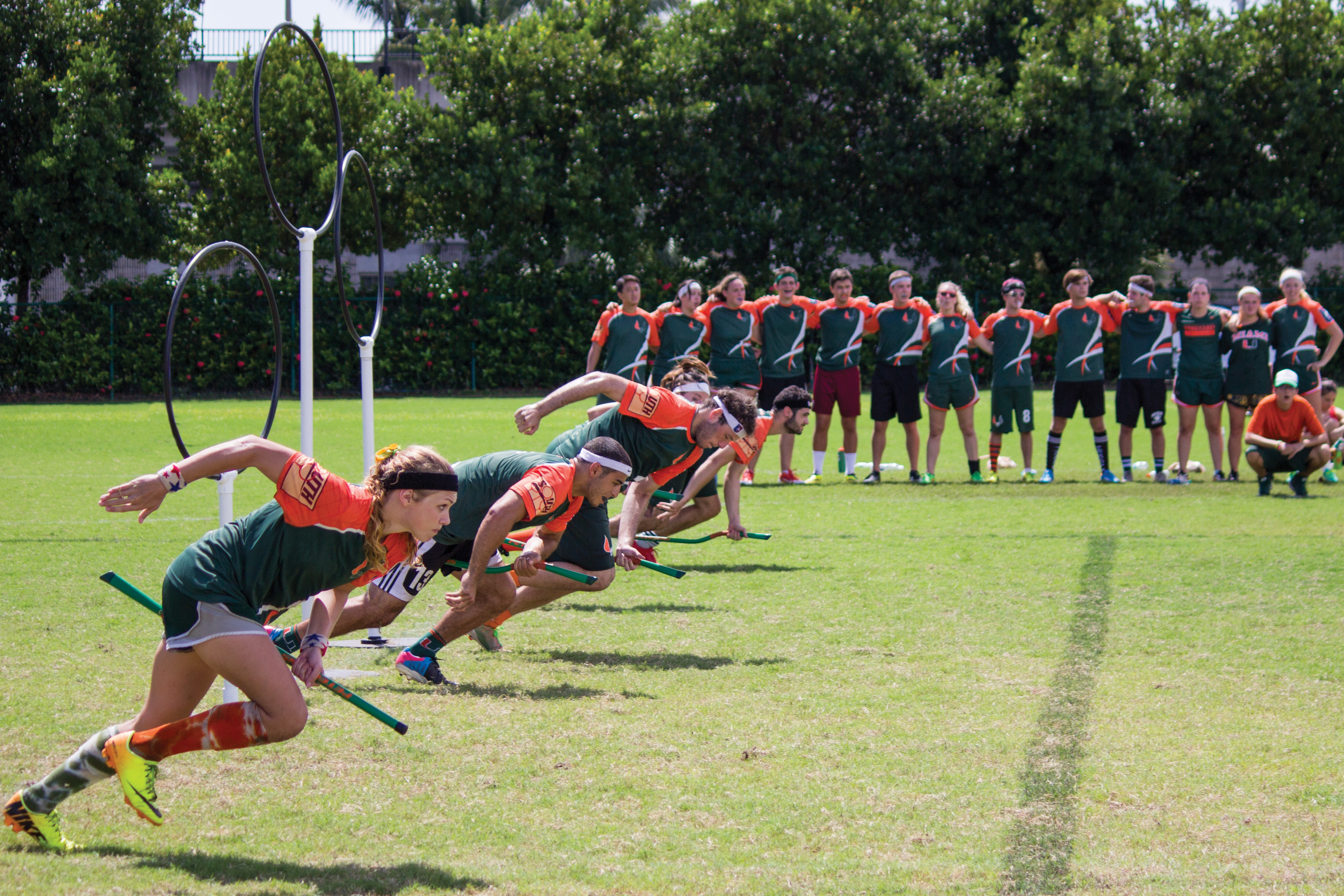 The most popular game in the wizarding world transcended fiction and materialized on the Intramural fields Saturday. Hooped goal posts on oval pitches awaited players arriving to participate in the second annual Canes Classic Quidditch Tournament hosted by the University of Miami Quidditch Team.

The tournament featured nine teams and was scheduled to run from 9 a.m. to 5 p.m. Originally supposed to include pool play followed by single elimination, the tournament only consisted of pool play due to heat, injuries and time constraints.

The Canes, who are four-time South Regional Champions and have been ranked in the top 25 teams for the past five years, upheld their competitive reputation by obtaining a record of 3-1 during the tournament.

Nine teams including Miami, FGCU, FIU, South Florida, Central Florida, Florida State, Rollins College, Florida’s Finest and an unofficial team for unaffiliated players known as the Friendly Rainbows, assembled on the field to battle it out.

As hosts of an official U.S. Quidditch tournament, the Canes diligently prepared to achieve success on their home field.

For the teams playing in the official pool, the tournament was crucial in establishing their record.

“We’re in the official pool, so these games go into our record and play a role in deciding whether we qualify for the World Cup or not,” said Antonio Matos, a keeper for FIU.

Despite the treacherous rain that Miami has experienced in the past week, the sun shone high and bright, illuminating the colorful jerseys of the players. Florida’s Finest Flamingos had the most distinct jerseys consisting of hot pink and black stripes mimicking their name.

As pool play began in the morning, the players quickly realized the presence of an additional competitor that would need to be outmaneuvered: the sun. In order to outplay the heat, freshmen Annika Socha said, “We have to keep a certain mindset that takes our mind off the heat so that we can focus on playing the game. We also continually sub. That’s how we power through it.”

No team was spared from injuries, either. As a contact sport with a mix of elements from rugby, dodgeball and tag, quidditch’s competitive nature was made evident by the ice bags and limps exhibited by multiple players. In the end, these overwhelming factors put the tournament behind schedule and the single elimination portion of the tournament was cancelled.

In spite of the heat and injuries, the teams maintained their spirit throughout the tournament, constantly chanting and cheering each other on. Off the field, players lost their competitive flair, engaging in laughter and friendly banter demonstrating the unity created by a love for the unique game.

Miami’s most aggressive game of the tournament was against Florida’s Finest, whom they lost to in the finals last year. Before the game, the Canes huddled in a circle and began to chant, asserting their confidence and spirit on the field. The Canes and Flamingos battled it out, going neck and neck.

“All I was thinking was, ‘Don’t let them catch the snitch,’” Miami seeker Daniel Cantrelle said of the game that was decided in double overtime. “I knew it was going to be a long game, and I knew we had a chance to win, so I kept playing, giving it my all.”

The Canes put forth a commendable effort, but ultimately lost the game by 10 points with a final score of 160-150.

The Canes regrouped from the disappointing loss to claim victory against Florida State 110-50. Team captain Bernie Berges made an impressive block as keeper late in the game, which led to a Canes’ score. The most stunning play, however, came from the Seminoles when one of their players managed to score by not only getting the quaffle through the hoop, but also himself. The Canes ended the game with an impressive snitch catch.

At the end of the tournament, the top teams were Miami at 3-1, Florida’s Finest at 3-0 and Rollins College, also at 3-0. South Florida finished 2-1 and Florida Gulf Coast finished 2-2. FIU and Florida State both ended 1-3 while the Friendly Rainbows finished 1-2 and Central Florida came in last at 0-4.