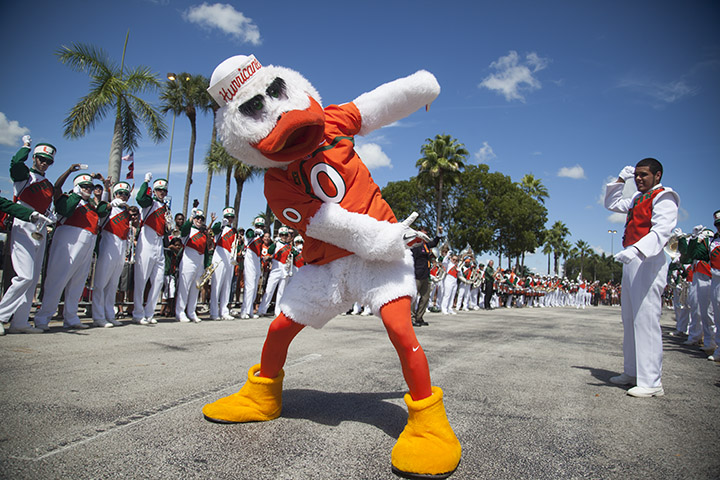 Saturday afternoon before the football team took on the Bethune-Cookman Wildcats, freshmen and first-year students prepared for the University of Miami’s annual tradition that takes place each first home game of the season: Freshmen Walk. Freshmen Walk is an initiative created by Category 5 and Hurricane Athletics that allows freshmen to walk on to the Sun Life Stadium football field before the first home game begins.

“Across recent years, we [Category 5] have looked at Freshmen Walk as the start of freshmen and first-year students’ time at the University of Miami, starting on the field, then ending on the field as a senior,” said Hecht Residential College Area Director Jeremy Bourgoin. “To actually be a UM fan and a Miami Hurricane and actually walk on the field where the [football] players are going to be playing an hour later is something really special.”

Due to the early arrival needed for Freshmen Walk, students loaded the buses in the middle of Saturday’s downpour. Despite the rain, freshmen and first-year students did not miss out on this once-in-a-lifetime opportunity.

“You’d think that the rain would bring people down and lower their spirits, but it just made more people pumped for the game,” said freshman Summer Singh. “As soon as we stepped off the bus, everyone poured out. It was like the bus ride was just quiet as everyone dried off and recharged. Once everyone got off, it was almost the same amount of energy or more than getting onto the bus,” said Singh.

Once students got to the stadium, the sky cleared and the rain stopped. Students prepared to go through the tunnel.

“Running through the tunnel got me really pumped up for the game,” said freshman Bruna Fernandes Da La Silva.

While the event is designed for freshmen and first-year students only, students that are freshmen resident assistants get the opportunity to relive freshmen walk with their residents.

“My freshman year, I was very awestruck. This year, though, I was more focused on my resident’s reaction than my surroundings. Seeing all of their faces light up and the speechless expressions was honestly more fulfilling,” said resident assistant and junior Ivan Traczuk. “They’ll have their memories of tailgating and the rowdy student section, but they’ll also have the memory of starting their careers as a Miami Hurricane on the field. That’s something not every college student can say,” Traczuk said.

For students that were unable to make freshmen walk, the senior walk at the final home game of the season gives them the opportunity to walk the field as a senior to close out their time as a Miami Hurricane.