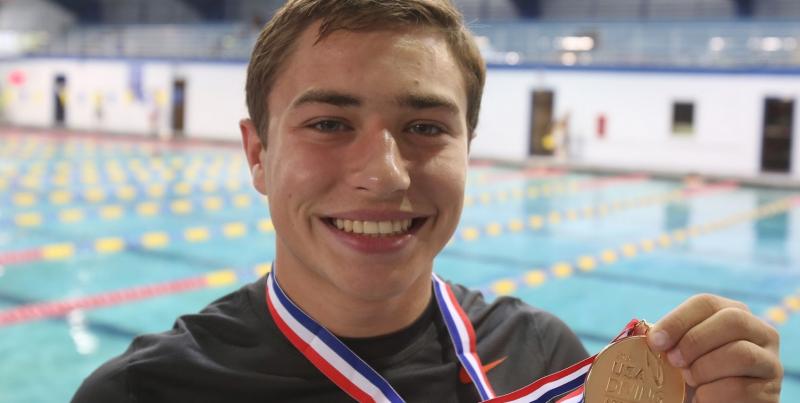 Dinsmore, who represented the United States at the FINA World Championships in Kazan, Russia in July, won the men’s 10-meter platform event with 422.15 points. He was in a tight race for the gold with diver Zach Cooper, but Dinsmore came out on top in the final round, winning by 15.85 points.

“It came down to the last dive, and that’s what makes a great contest,” Dinsmore said to HurricaneSports.com. “It was a little tough for me coming back from worlds – you’re on such a high and then you’ve got to get ready for nationals a week later.”

Like Dinsmore, Herrera also had a busy summer: he won bronze in the men’s 1-meter at the 2015 World University Games in Gwangju, South Korea in July. The Cuban native finished the AT&T Championships with 435 points in the 1-meter, outscoring second place finisher Aaron Fleshner by 60.85 points.

“I thought I did really well. My dives felt good, and I thought I was powerful. Everything went right,” Herrera said to HurricaneSports.com.

The young talents are important assets to the team this season, especially after the departure of national champion and 2014-15 male student-athlete of the year, Sam Dorman. Coach Ableman expects to see great things from Dinsmore and Herrera this year.

Ableman said to HurricaneSports.com that Dinsmore “should be one of the best in college diving in the 10-meter as a freshman.” Of Herrera, Ableman said, “I’m hungry for him to continue and make another step in his sophomore year.”

The Canes’ season starts on Sept. 18 at the All-Florida Invite in Gainesville, Florida.