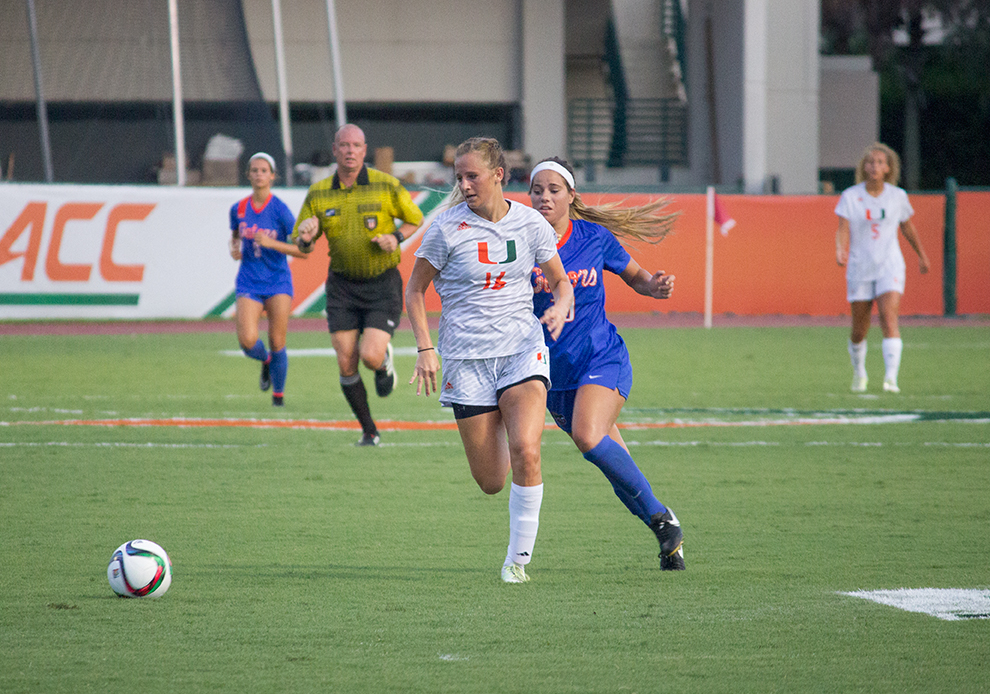 The Hurricanes dropped their home opener to the No. 14 ranked Florida Gators, 4-2, in front of a packed crowd at Cobb Stadium with on Thursday night.

Forward Savannah Jordan spoiled Miami’s first game at home with the second hat trick of her career for the Gators. The junior earned All-American honors in 2013 and in 2014.

“We knew that she’s very good at quick turns,” Hurricanes redshirt goalkeeper Catalina Perez said of Jordan. “I feel that they attack very well. I know that we can grow from this game, and we can show that we’re a great team and that we can beat teams at this level.”

Perez made six saves in her first start as a Hurricane after missing all of last season with a torn ACL.

A scoreless first half led to a flurry of goals early in the second half of the game that was streamed live online by ESPN.

After 56 minutes without a score, both teams combined for five goals over the next nine minutes of the game.

Junior Hurricanes forward Gracie Lachowecki opened the scoring in the 57th minute with a shot to the bottom left corner of the net from the middle of the box. Senior forward Amy Schmidt battled to get possession of the ball on the right side of the box, and laid a soft touch pass to Lachowecki 12 yards out with just the Florida goalkeeper to beat.

Jordan answered back with two goals in three minutes to give the Gators the lead. The dangerous forward evened the score in the 58th minute with a curling shot to the bottom right corner of the net from the top left of the box.

Three minutes later, Jordan got the ball deep in the box, took a dribble to her right, and nailed a shot to the bottom left corner of the net.

The Hurricanes recovered with a goal one minute later on midfielder Jamie Brunworth’s first goal of her NCAA career. The freshman curled in a beauty from 18 yards out into the top right corner of the net.

The Gators responded in the 65th minute on a nearly identical shot by midfielder Sarah Troccoli. It was also the freshman’s first goal of her NCAA career.

“We scored, they came back, and then we scored again,” Hurricanes coach Mary-Frances Monroe said of the rush of goals in the second half. “It goes to show that this team wants to fight and they’re not going to put their head down when a goal gets scored against us. I’m really proud of that because I think last year we would’ve put our heads down.”

Jordan sealed the game in the 85th minute with a rocket from inside the box to put Florida up 4-2.

Miami defenders Maisie Baker and Gianna Dal Pozzo crowded Jordan well in the first half, preventing her from taking a single shot in the first 45 minutes. That wasn’t the case in the second half, and Jordan made the Hurricanes pay for giving her space near the top of the penalty box.

The Gators outshot the Hurricanes 19-8 and dominated possession for most of the night.

The Canes (0-2) lost their season opener 1-0 to Texas last Sunday. The Gators (2-1) opened their season with a 2-0 win on the road over No. 17 Central Florida, followed up by a 1-0 loss in overtime to Ohio State in Columbus.

The Hurricanes next play against Central Florida 1 p.m. Sunday at Cobb Stadium.