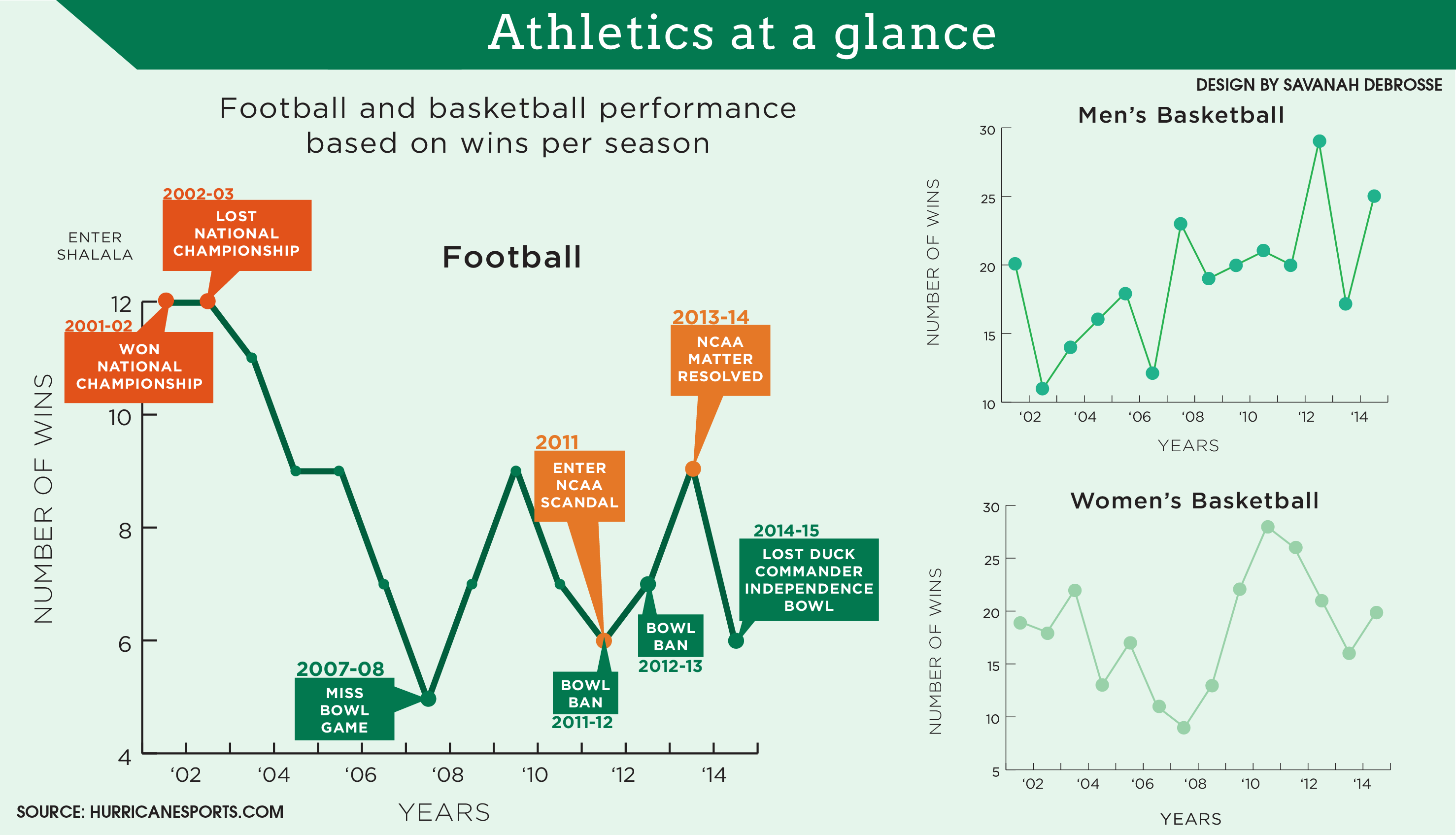 Reflecting on a university president’s tenure without looking at athletics is an impossible feat, especially at a school with an athletic history like UM’s. President Donna E. Shalala stood by the university amid controversy and difficult times in the athletic department.

Men’s and women’s basketball along with football get the most media attention, so their success could mean more funding and bolster support. While the basketball programs have taken an upward turn, football has struggled during Shalala’s tenure.

In 2004, the university left the Big East Conference and joined the ACC which changed the competition. In another big move, the Canes left the crumbling Orange Bowl in favor of playing at SunLife Stadium.

The stadium was in need of renovations, and when the plans to fix it up fell through, Shalala was forced to make the executive decision to relocate, leaving behind a major part of UM history. The Orange Bowl was demolished in 2008 and replaced by Marlins Park.

The football program has been shaking off the stigma from the NCAA investigation that went on for over two years when former booster and convicted felon Nevin Shapiro decided to go public about Miami’s violation of NCAA rules. To lessen the NCAA punishment, the university self-imposed bowl bans from 2011 to 2013.

Billy Corben, director and producer of ESPN films 30 for 30 documentaries “The U” and “The U: Part 2,” does not feel that Shalala fully took responsibility for protecting students during the Shapiro scandal.

“In their shameless fundraising zeal, they first exploited the student-athletes and then, when time came for accountability, scapegoated them,” Corben said. “I think history will still be quite kind to her tenure, which began with a national championship in football and ended with a multi-million dollar real estate scheme to build a Walmart on endangered forest land. What could be more Miami than that?”

When it was revealed that the NCAA had improperly handled the investigation, Shalala felt that the university was being bullied and stood up in defense of Miami.

“Many of the charges brought forth are based on the word of a man who made a fortune by lying,” Shalala said in a statement in 2013. “The NCAA enforcement staff acknowledged to the university that if Nevin Shapiro, a convicted con man, said something more than once, it considered the allegation ‘corroborated’ – an argument which is both ludicrous and counter to legal practice.”

After the investigation and subsequent loss of scholarships, the football program has struggled. Fans who were frustrated with the lack of success and entire scandal were calling for head coach Al Golden to be fired. Even with this setback, football program does have a winning record of 116-60 since Shalala took the job.

Though football was a source of unrest in athletics, the basketball programs have both improved.

Men’s Basketball coach Jim Larrañaga took his team to the NCAA tournament in the 2012-13 season and made it as high as No. 2 in the country, giving fans something to root for after a lackluster football season. It was at this time when the news of an improper investigation came out and Shalala released her statement.

Of the field and court, Shalala has supported athletics in other ways.

In raising money for the athletic program over the years, the Schwartz Athletic Center was opened in 2013 to provide academic and personal help for athletes.

Shalala is also known for her presence at sporting events. Earlier this month, she supported the women’s tennis team against UNC.

According to Athletic Director Blake James, Shalala has been the UM Athletics’ biggest supporter.

“Though her departure will be a loss, we are a better university because of her,” James said in a statement.