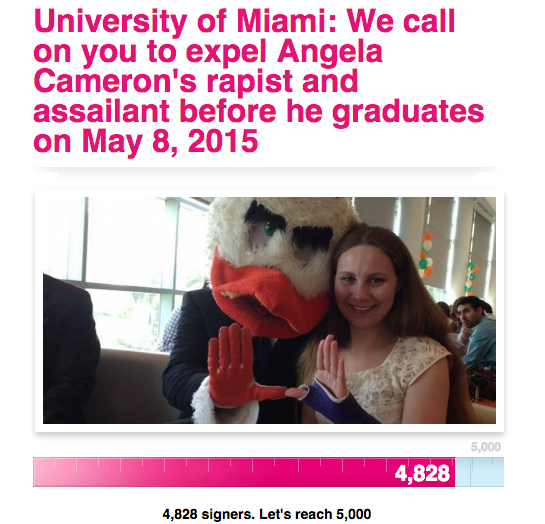 One of the speakers was junior Angela Cameron.

“You could hear a pin drop,” recalled Westaway about Cameron’s speech.

Cameron described her violent rape in April of last year – which left her with a cracked vertebrae and other injuries – and detailed how she sought help from the university and the criminal justice system to no avail.

After reporting the attack to the university and UMPD, Cameron chose to go ahead with a disciplinary hearing. Her aggressor was charged with relationship or intimate partner violence and sexual assault and battery. Despite this charge, his sentence was a one-semester suspension from UM. He returned to school this spring and is set to graduate at the end of the term.

Cameron’s story struck a nerve with Westaway and the students in attendance at Canes Consent. Immediately following the event, Westaway approached Cameron with the idea of a petition to get her rapist expelled from the university.

Just hours after the petition went live, it had over a thousand signatures. As of Tuesday, it had more than 5,000.

Westaway started Canes Consent in December of 2013 after several of her students went to her with their experiences of being sexually assaulted. More than a year later, she said she is still stunned by the stories of students who come to her.

Westaway said she was furious with how UM handled Cameron’s case. She noted that Cameron came forward with her story shortly after her rape – reporting it to a Resident Assistant just one week after it happened and to UM Police two weeks later. Still, she received no help from the police and the university gave her rapist a minimal sentence.

With that in mind, Westaway and her students focused all their energy on getting justice for Cameron. The students, still wearing their Canes Consent tank tops, sat with Cameron in their usual classroom and brainstormed strategies to get the university to expel Cameron’s attacker.

Westaway said she and her students hope the petition will be enough to get the university to act, but that she will do whatever is necessary to help Cameron.

“This is a campaign,” Westaway said. “It is already in motion, and until we get justice, we will not stop.”