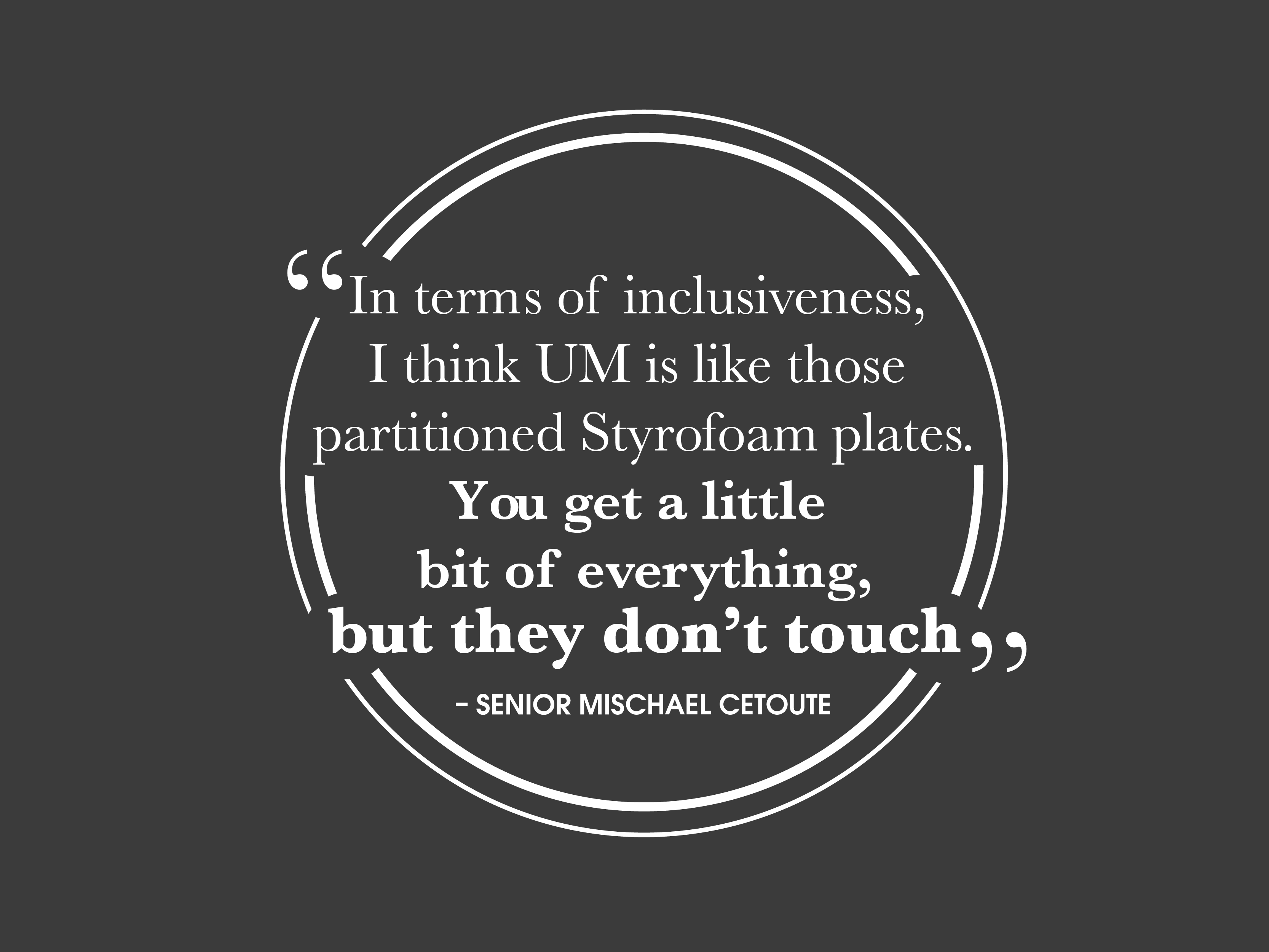 [dropcap]J[/dropcap]unior Klaudius Maynard grew up in the U.S. Virgin Islands, a territory with a predominantly black population. There, Maynard was always surrounded by people who look like him and, therefore, unable to experience much diversity.

He transferred to the University of Miami looking for just that. By the end of his first semester, however, Maynard noticed he had naturally gravitated toward other students from the Caribbean – his first group of friends was from the Bahamas, Trinidad and Tobago, and Jamaica.

Senior Mischael Cetoute said the inclusiveness of other races and ethnicities on UM’s campus works like a partitioned styrofoam plate.

“You get a little bit of everything, but they don’t touch,” he said.

Cetoute sits on the Task Force to Address Black Students’ Concerns, which was assembled this spring. It consists of 10 student leaders and 14 faculty members, and is divided into subgroups to address five issues: the climate for black students on campus, enrollment and retention of black students, programming for diversity and inclusion, sensitivity and inclusivity training, and recruitment of black faculty.

In addition to the task force, other areas of campus have recently brought attention to the topic of race. On Wednesday night, the Know Justice, Know Peace symposium on race, policing and social justice featured Trayvon Martin’s mother, Sybrina Fulton, Johnetta Elzie of The Ferguson Protestor Newsletter and other leaders in the areas of race and justice.

The Intercollegiate Debate Team has also been holding a series of community discussions on race, with topics of debate including whether affirmative action is necessary.

“We thought that race would be a good topic because it’s current, it’s relevant, it gets people talking, and there’s differing opinions on it,” said junior Renee Reneau, who joined debate her freshman year.

[dropcap]T[/dropcap]he University of Miami is consistently ranked one of the top schools for diversity in the country. In this year’s undergraduate class, minorities make up the majority, while 49 percent of all undergraduates are white, according to the Fall 2014 UM Fact Book.

Over the past four years, the number of black freshmen entering the university has grown by 26 percent, and the Asian/Pacific Islander population has grown by 42 percent, according to the Fact Book.

In an online survey of 215 students by The Miami Hurricane, 70 percent of respondents said they interact often with people of other racial or ethnic backgrounds in the classroom. The survey showed this is more than they interact with one another in clubs, at events on campus, or within their own groups of friends.

Senior Elaine Golden, who was involved with the Office of Multicultural Student Affairs’ UNITY Roundtable last fall, said she thinks most UM students regularly interact with people from different racial and ethnic backgrounds during their time at this university.

However, she explained that those interactions aren’t necessarily indicative of deep, meaningful connections.

“If you ask fellow students to think of their two closest friends here, those individuals would most likely be of a similar background to the person answering,” she said.

Reneau said that in the city of Miami, special attention is given to ethnic background. It’s common to meet people and ask where their parents are from, which is essentially a question about ethnicity, she added.

“I think it’s more important to ask, ‘Where are you from as a person? Where did you grow up? What kind of environment do you come from?” she said.

[dropcap]T[/dropcap]he National Survey of Student Engagement showed that, in 2013, white and international students at universities across the nation were less likely than Asian, black, or Hispanic and Latino students to have discussions with people of another race or ethnicity. UM is currently gathering student responses to the NSSE for 2015.

Cetoute said that he sees black student life as distinct from the rest of the UM population — but it’s not because of any desire for isolation. People of like interests tend to associate with each other, he explained.

“A lot of the black students on campus are first generation or come from households that aren’t wealthy, and so things like going out to South Beach every weekend are not feasible,” Cetoute said. “Your freshman year, you quickly make friends with people who like doing the same things as you, and once you leave the sort of forced interactions of the towers, you end up surrounded with people who look and think like you.”

[pullquote]”There is something in me that says like, ‘I don’t know, I’m not black, so maybe I can’t participate as much.”[/pullquote]

Reneau agreed that, while she loves learning about other people’s cultures, she understands the hesitation in becoming friends with people of another race. For instance, she’d like to join United Black Students (UBS) but has felt tentative about it. (UBS emphasizes that its members can come from any background.)

“I’d like to be more involved with it, but there is something in me that says like, ‘I don’t know, I’m not black, so maybe I can’t participate as much,” she said.

UBS President TeQuan Taylor, who also sits on the task force, said he thinks that students of different races are most likely to interact with each other in a structured environment, like the classroom. At campus events, however, Taylor feels students choose to attend with friends who are like them.

Sophomore Marcus Lim, vice president of the Council of International Students and Organizations (COISO), said that when the Chinese Students and Scholars Association hosts a cultural event, for example, he’d estimate about 95 percent of people who attend are Chinese. He thinks the other 5 percent attend to explore.

“They’re just there to culturally immerse themselves,” Lim said. “It’s quite rare for a different nationality to go to [another] nationality and form really strong friendships.”

Taylor, an international studies major, thinks cross-cultural interactions within one’s own student organization is the exception to the rule.

Golden and Maynard said they have found a diverse group of friends through their involvement in the STRIVE service learning group and Debate Team, respectively.

Assembly of the task force

[dropcap]U[/dropcap]M President Donna E. Shalala called for the creation of the Task Force to Address Black Students’ Concerns in response to the negative reactions to a peaceful Black Lives Matter protest last fall.

Vice Provost for Academic Affairs Brian Blake, who is leading the task force, said the group is attempting to evaluate what the university is doing with regards to climate and recruitment. Then, they will compare UM’s efforts to similar universities, including Emory, University of Southern California and Vanderbilt.

“They really just want to get a sense of the community and, ‘How diverse is it?” he said. “They’re going to do some benchmarks against other institutions and try to get an understanding of what the community really should look like.”

According to Blake, the task force is trying to determine whether the amount of programming for diversity-related activities on campus is adequate for the UM community.

While about half of student respondents to The Miami Hurricane’s survey said UM’s encouragement of contact among students from different backgrounds is “about right,” 42 percent thought the university is doing too little.

Blake said he expects the task force will find that the black student population in particular faces acute challenges, but these may translate to the broader community.

[dropcap]L[/dropcap]im, who came to UM from Singapore, said he thinks the campus is receptive and students are friendly, but he explained that international students also face subtle forms of racism. For example, classmates may alienate a Chinese student in a group project because of a potential language barrier.

“It’s not on purpose — it’s completely accidental. It’s just that the Chinese person can’t really communicate with them, and that’s the basis of forming friendships and being receptive,” he said.

International students comprise 14 percent of the undergraduate student body at UM. China is the best represented country, with 972 students, according to the Office of Admission website.

[pullquote]“If you’re targeting minorities, the entire international population at the University of Miami is considered a minority already.”[/pullquote]

Lim said that when he first heard about the task force, he was glad that the university would respond to the black students’ situation, but at the same time, he wondered, “Why stop at black students?”

“If you’re targeting minorities, the entire international population at the University of Miami is considered a minority already,” Lim said.

Blake said that, for now, the task force remains focused on the concerns of black students.

Lim said he acknowledges the immediate need for attention to black students’ concerns.

Cetoute, a political science and Africana studies double major, gave an example of a personal experience with racism in the classroom his freshman year. Before he started wearing business casual attire around campus every day, Cetoute’s professors would often mistake him for a football player, he said.

“It made me feel like the only black men at this university who belonged here were not here for academics,” he said.

Maynard said he sees the value in considering the climate for other minority groups on campus.

“When it’s portrayed as a black and white issue, it becomes a linear conversation,” he said.

[dropcap]T[/dropcap]he Task Force to Address Black Students’ Concerns is charged with issuing a report with recommendations by May 15, and according to Blake, President Shalala has expressed her commitment to setting some of those recommendations in motion before she steps down.

According to Cetoute, the task force is looking at ways UM can foster meaningful interactions across racial lines. He said the inherent problem he sees is intolerance.

“We need to do a better job of teaching our students why diversity is a necessary ingredient for any successful enterprise, as opposed to a cool bonus that can be added for additional value,” he said.

[pullquote]“We need to do a better job of teaching our students why diversity is a necessary ingredient for any successful enterprise.”[/pullquote]

Golden said she thinks the best way to combat systemic inequality and prejudice is by forming deeper levels of connection and respect.

“If we can develop these connections during our time in college, we will be better equipped to go on to make our workplaces and communities more inclusive places,” she said.

“While we cannot – and should not – simply tell people who they should be friends with, we can promote campus social structures that help break down barriers to inclusiveness,” she said.