A candied “Candide,” a “Berry Hungry Caterpillar” and a floury “Perks of Being a Wall-flour” were among the entries in the 15th annual Edible Book Festival at Richter Library.

This festival celebrates the nourishing power of novels with edible art. Members of the university community, students or otherwise, competed in four categories: Wittiest Pun, Most Edible, Healthiest and Best in Show.

Senior Cassandra Sanabria and her sister baked “The Chocolate Room,” an edible representation of the chocolate room from “Charlie and the Chocolate Factory.”

“We also made ‘Julius Caesar Salad,’ from Shakespeare’s ‘Julius Caesar,’” Sanabria said. “We put a little quote with the carrot – which represents Julius Caesar – that says, ‘Et tu Brutus Sprout.’”

Since its founding in 2000, the International Edible Books Festival has been recognized and celebrated in 22 foreign countries and held in university libraries across the United States. It’s a chance to literally (and literarily) “eat your words.” Puns are abundant.

“I liked ‘Game of Scones,’ because it was so innocent, and that show is really bloody. It’s kind of cute, the contrast,” senior Leslie Thompson said.

The artwork ranged from bowls of salad and platters of fruit to a full-fledged fondant cake in the shape of a book. Made of cupcakes, “The Very Hungry Caterpillar,” inspired by the children’s book of the same name, was one of more than 20 exhibits entered into the competition. Victoria McKaba // Staff Photographer

“I thought of tying something together in knots, and I thought Twizzlers would be a good option,” he said. “Then I remembered a book from my childhood called Maniac Magee. The main character unties a giant knot and earns himself free pizza for life, so I decided that was a really good fit and that I would be able to do it fairly easily but still have fun with it.”

The winners of this year’s event were Hunter Hewitt, Wittiest Pun, for “Game of Scones;” Vanessa Rodrigues, Most Edible, for “Telltale Candy Heart;” Cheryl Gowing, Healthiest, for “The Berry Hungry Caterpillar;” and Luisa Norris, Best in Show, for “Book of Flowers.”

Richter Library will continue this April Fool’s Day tradition next year. Visitors to the library can once again vote for their favorite food sculptures, platters and cakes – and eat them, too. 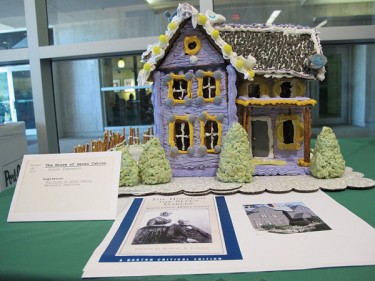