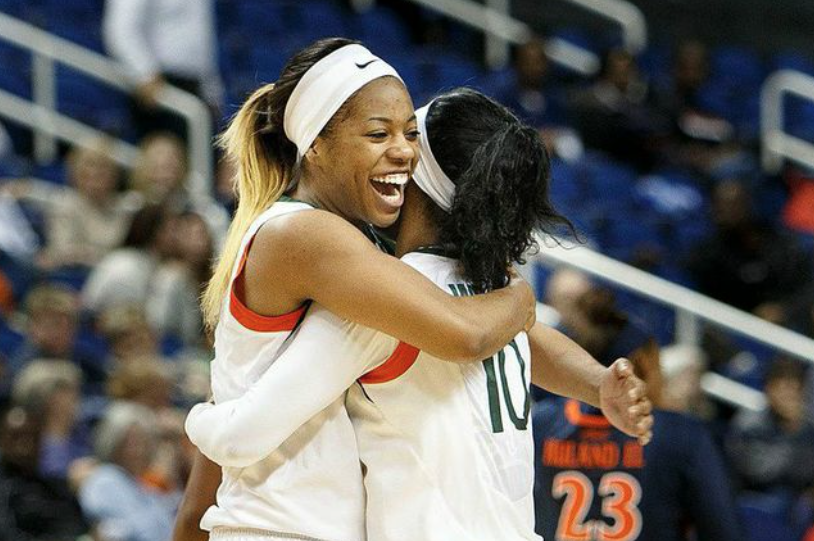 IOWA CITY, Iowa – It was vintage Adrienne Motley yet again.

Led by a resounding 30 points from its sophomore star, the University of Miami women’s basketball team upset the sixth seeded University of Washington Huskies 86-80 at the Carver-Hawkeye Arena during Friday’s first round tournament action.

“That had to be one of the funnest games to coach in that I’ve had in my career,” head coach Katie Meier said. “It had to be awesome for the fans and for television.”

The Canes shot 13-17 from the free-throw line in the last minute while fighting off a late Husky rally. UW’s Amina Williams dropped in a layup with 25 seconds remaining to bring the score to 81-78. UM’s Michelle Woods, fouled on the ensuing inbounds, split a pair of free throws to give the Canes a four point edge with just over 20 seconds remaining.

After a free throw by guard Jessica Thomas raised the Canes lead to five, UW’s Jazmine Davis buried a jumper with 13 seconds left to make the score 83-80. That would be it for the Huskies.

After forward Necole Sterling split a pair of free throws, Davis missed a 14-foot jumper that forward Erykah Davenport rebounded. Davenport sank both her free throws before Davis’ last-ditch-effort three banged off the backboard, sending the Hurricanes on to the second round.

The Canes, of course, were led offensively by Motley’s 30 points on 10-18 shooting, including 8-10 from the free throw line. Thomas added 19 points of her own to go along with six rebounds, and Davenport grabbed 13 boards as well. Guard Michelle Woods added 17 points of her own along with four boards.

“I know Coach asked me how I felt out there, and I was just like, ‘it feels good,’” Motley said. “I just had this kind of feeling today, and it just so happened that we came out here and we executed and I was just hitting shots.”

It was a game that defined what makes March Madness so much fun. Both teams were knotted up at 71 with just over three minutes remaining before the Canes reeled off a mini 8-2 run that was sparked by a Motley jumper with 2:40 remaining.

Huskies head coach Mike Neighbors began subbing in his bench players to foul the Canes, resending in his starters between Hurricanes free throws. The Huskies, led by all Pac-12 selection Kelsey Plum, were not able to bridge the gap as the Canes held the lead for the final three minutes.

The Canes held Plum, seventh in the nation in scoring at 22.8 ppg and one of the 15 finalists for the Wooden Award, to 17 points on 5-14 shooting. Forward Talia Walton added 17 points of her own while Plums backcourt mate Davis added another 16. Williams, UW’s all-time rebounds leader, added 10 boards after averaging nine during the regular season. Every UW starter finished with double figures.

“They were tremendous this afternoon,” said Neighbors of the Canes performance. “I thought their players did exactly what their players have been doing all year long.”

It was mainly Woods who shut down Plum for most of the game, and Meier was quick to praise the red-shirt junior for her performance.

“I will say that if I had a third [player] up here [at the press conference], I would have Michelle Woods,” said Meier. “Because her defensive effort on Kelsey Plum was as fine an effort as you’re ever going to watch.”

Neither team was able to establish much of an edge in the first half, with the Huskies (23-10) never leading by more than four while the Canes never were able to pull away by more than a couple points.

It was not until the final three minutes of the first half that the Canes (20-12) started to get their shots to fall, going on a 9-2 run to end the first half with a 41-33 average.

“The last thing I said at halftime when we were walking out is, nobody’s tired, nobody’s hurt and nobody needs a sub,” said Meier. “You just have to keep this mentality.”

This was the Canes first NCAA Tournament appearance since 2013, and its fourth in five years after going to the NIT last year. In its most recent appearance, the Canes also found itself in the Carver-Hawkeye Arena, where the team lost in the first round to eighth-seeded host Iowa as a nine seed.

The Huskies, under Neighbors, made its first tourney appearance since 2007.

The Canes move on to the second round where it will face the winner of American-Iowa, a 14-3 matchup. That game can be seen live on ESPN2 and will also be broadcast on 90.5 WVUM and streaming on WVUM.org.