GREENSBORO — Heading into Friday afternoon’s ACC quarterfinal matchup, Miami was the only team in the conference to defeat Notre Dame in the past two seasons.

Doing it again, however, was not to be.

Despite a career-high 24 points from sophomore Jessica Thomas, a relentless Notre Dame (29-2) squad overcame multiple Miami (19-12) runs en route to a 77-61 victory at the ACC tournament.

“I thought Notre Dame was very, very focused – offensive game plan and defensive game plan,” coach Katie Meier said after the game. “They came in here and executed a heck of a game plan, had us pretty confused in the first half, switching up their defenses as much as they did didn’t allow us to get out in transition and get our flow going.”

Adrienne Motley, the star of Miami’s upset of the Irish earlier this season, was held to just five points on 2-8 shooting.

Motley scored a career-high 32 points in January against Notre Dame. She was limited to just three field goal attempts in the first half, and it was just the second time this season she scored fewer than eight points.

Thomas played her most effective game as a Hurricane during Motley’s struggles, her 24 points coming on 9-14 shooting, while only committing one turnover, an improvement from six the day before against Virginia.

“Coming into this tournament, actually, I’ve not really been in a slump but just trying to figure out my offensive flow,” said Thomas after the game. “…Finishing with 24, still took the L, you know what I mean, but you’ve got to have more of an impact with 24 points for the team.”

Jassany Williams added 16 for Miami, setting a career-high that eclipses any game she had at Auburn as well. Williams was effective from all around the painted area for Miami, hitting seven field goals on a variety of mid-range jumpers and post moves.

Miami will now await selection Monday to hear about its NCAA tournament fate. Miami’s RPI sits at 65; of Miami’s 12 losses, only two of them are to teams with an RPI less than 65.

A number of bracket experts had Miami in the NCAA tournament prior to the start of the ACC tourney; the consensus seemed to be that Miami needed a win against Virginia after dropping its final four regular season games. Miami won its opener against UVA, 62-52.

“I think that we’ve shown this year and in years past that we can beat anybody. … We can handle adversity, we can beat people,” Meier said to a reporter who asked for her thoughts on Miami’s case for the tourney. “We did beat Notre Dame and there’s not another couple head coaches in the country that can say that – me and one another, and that’s it. That’s a team that has such flair, and we have such dynamic players.” 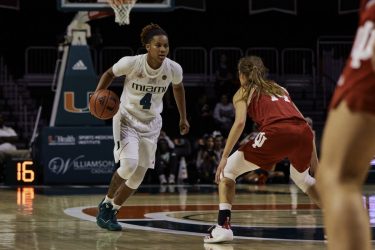