Sophomore sprinter Shakima Wimbley and senior Christian Cook led the University of Miami track team to a strong finish at the ACC Indoor Championships in Blacksburg, Va. over the weekend. At the championships, the women placed seventh overall and the men placed eighth.

Wimbley defended her 200m Indoor ACC crown with a personal best time of 23.08 seconds, a time that ranks third in UM history. Wimbley’s previous personal best was 23.35 seconds, .27 seconds slower than her new record. The sophomore star also finished second in the women’s 400m to cap off a strong weekend.

Junior jumper John-Patrick Friday tied for third in the high jump, breaking his own school record in the event with a jump of 2.11m. Friday also finished fifth in the men’s triple jump, covering a distance of 15.50m and in the long jump with a mark of 7.40m.

Redshirt junior Lea Johnson defended her ACC Indoor title in the weight throw with a distance of 21.45m, placing her in second in the UM record books. The St. Louis native finally broke the 21m plateau and will be going to nationals. Thrower Tiffany Okieme placed third in the event with a mark of 21.16m.

Sophomore Carlos Mangum set a new school record in the men’s weight throw with a distance of 19.95m and finished fifth in the event.

The combination of Kelsey Balkwill, Taneisha Cordell, Anthonia Moore and Wimbley finished third in the 4x400m relay with a time of 3:38.14. Their male counterpart team of Robert Grant, Henri Delauze, Josh Johnson and Cook placed eighth with a time of 3:15.08. 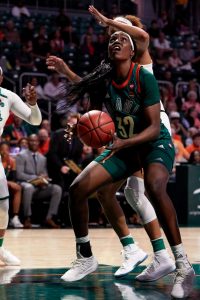 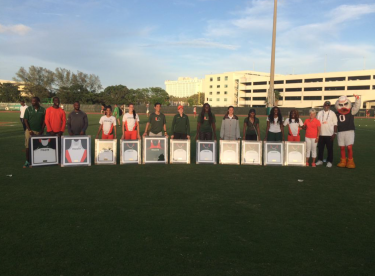