Camp Kesem counselors at the University of Miami // Courtesy of Facebook

Junior Miranda Goot celebrated a landmark birthday, her 21st, with more than good times with friends. She used the occasion to raise money for an organization close to her heart, Camp Kesem.

With the creation of a Facebook event, she asked her friends and family to donate $21, or however much they could, as a gift for her 21st birthday. The money raised was donated to the camp, which is run by University of Miami students for children who have a parent who has or has had cancer.

“What organizations we are involved in is a large part of our individual identities, so it makes sense to me to celebrate those organizations on your birthday,” Goot said.

Goot came up with the idea to use her birthday as an opportunity to raise money for the camp during UM’s Dance Marathon, for which she was a co-chair. She saw other E-Board members using their birthdays during the event to raise money for Miami Children’s Hospital and decided to do the same.

She chose to raise money for Camp Kesem because of her experience as a counselor there and the week she spent with two teenage girls at the camp.

“There is this amazing sense of family, love and support at camp and it is surprising how quickly you are able to build deep relationships with your campers,” she said. “Camp Kesem is important to me because it has such an impact on the families we serve. Camp also had a profound impact on me personally.”

The idea of raising money for camp as part of her 21st birthday reminded her of having fun even as a “grown up.”

“You are officially an adult,” she said of turning 21. “Yet, camp is all about being a kid, so I thought it would be an interesting juxtaposition, celebrating everything there is to love about being a kid and having silly, crazy camp adventures when I was aging out of being a kid.”

Using the opportunity to channel gifts and celebration on birthdays for a larger cause is one she recommends to her fellow students.

“You receive a lot of attention on your birthday so if you can funnel that to a cause or organization that is important to you, why not?” she said. 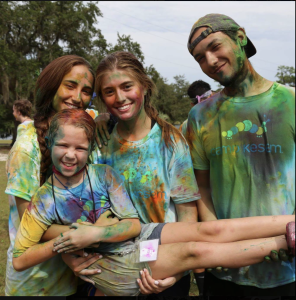