Introduce a Girl to Engineering Day provides opportunities for girls

Over 200 high school girls will trek across campus on Thursday for Introduce a Girl to Engineering Day, an annual event organized by the Society of Women Engineers (SWE) as a part of National Engineers Week.

Historically, engineering has been a male-dominated field. The event aims to show girls the possibility of an education and career in engineering, said Alyssa Rosenfeld, secretary of SWE.

“A lot of girls think engineering is only for boys, or they haven’t heard of it,” she said. “I know that I hadn’t really heard of it. They need to know it’s not a field for only men; girls can excel in it, too.”

Rosenfeld hopes the event will also introduce prospective female engineers to the many areas they can specialize in.

“A lot of times, girls have ideas in their minds that the stereotypical engineer has to be the nerd that sits behind the computer and spends all their time doing math,” Rosenfeld said. “We can show them six different labs and show them that there’s so many different things to do in engineering, so you don’t have to fit that stereotype of an engineer to be one.”

Particularly at UM, the number of women studying engineering is rising.

“UM has one of the highest numbers in the country,” said Stacie Arechavala, SWE’s high school outreach coordinator. “So we’re pretty good, but not enough.”

Arechavala has been planning the event since October with the assistance of Rosenfeld.

“For these past months, it’s been, ‘What might go wrong? How could we fix this?’” Rosenfeld said about the planning.

Arechavala made changes to the way the event is run. Eighteen schools will be represented this year, most of which are located in Miami-Dade county. This is an effort to invite schools that lack the opportunities of private schools or lack strong engineering programs.

The format was also altered to include more hands-on activities. Each girl will participate in four different activities, instead of two.

The first two of these four activities, Snap Circuits and K’nex Bridges, will be completed by every participant.

Snap Circuits will involve tasks like coordinating the blinking of lights to the sound of music, representing electrical engineering.

K’nex bridges will present the girls with a problem to solve under a limited time constraint and with limited resources, representing civil engineering.

Electrical and civil engineering were highlighted because the underlying skills of both types of engineering are the foundation for all other types.

Arechavala and Rosenfeld are both biomedical engineers, but they do a lot of electrical engineering work.

“We take a lot of electrical classes and learn about breadboards and circuits, and that’s what they’ll be doing,”Arechavala said. “It’s more to provide a basis for them.”

Arechavala said the activities also provide experience in the soft skills of engineering.

“The K’nex bridges activity teaches them competition,” she said. “Engineering takes a certain mindset. It’s a challenge and problem-solving. That activity also shows them more of that side of it and gives them real-world exposure to everything that’s encompassed in engineering.”

The final two activities are based on the six types of engineering: architectural, biomedical, electrical, environmental, industrial and mechanical, and will vary for every girl.

Prior to arrival at the University of Miami (UM), each participant filled out a survey indicating their interest in the different areas. This will determine her placement in the two activities best satisfying those preferences.

Each lab will be introduced by either a professor, a principal investigator in charge of that lab or a doctoral student, who will give an overview of what engineers do in that specific type of engineering. Then, about 50 volunteers provided by SWE will run the lab with the girls.

Volunteers for the event are typically female. However, this year, there are more male volunteers, like Luan Borges de Carvalho, a senior studying industrial engineering.

“I started engineering classes three years ago, and since I started, I saw how humans can become powerful with engineering,” he said. “I want to help more to join because engineering can help develop them as a person.”

Arechavala said the event does not necessarily promote the College of Engineering, but instead focuses on the entire field.

“It’s not a recruitment event for UM specifically,” she said. “It’s just awareness about engineering as a profession overall.”

Rosenfeld said she sees progress toward female acceptance in male-dominated fields and hopes that one day such efforts toward female engagement in engineering will become a thing of the past.

“Eventually, this won’t really be necessary,” Rosenfeld said. “As much as I love the event, I’d rather it not be necessary. You don’t need Introduce a Boy to Engineering.” 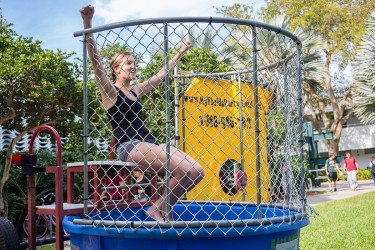