Despite a three-run burst late in the game, the Miami Hurricanes baseball team dropped its first contest of the season Wednesday night.

Miami fell 5-3 at FAU in a low-scoring affair that did not see the Hurricanes (4-1) score their first runs until the top of the seventh.

Freshman left fielder Carl Chester recorded his first career home run in the top of the 8th to tie the game, before FAU (4-0) quickly responded in the bottom of the inning with two runs off a wild pitch and sacrifice fly.

“They played better than we did. We made too many mistakes mentally and physically. We didn’t play well enough to win,” head coach Jim Morris said after the game.

Chester finished the game 2-5 from the plate, while infielder Edgar Michelangeli was the only other Miami player to record multiple hits, a contrast to Sunday afternoon’s slugfest against Rutgers in which the Canes plated 25 runs.

Sophomore right-handed pitcher Derik Beauprez picked up the loss, lasting two innings, while giving up six hits and three earned runs, walking one, and striking out one in 44 pitches.

Following the midweek loss, Miami will now turn its attention to the No. 6 Florida Gators. Miami travels to Gainesville this weekend for its annual series with the Gators, to be televised this year by the SEC Network and broadcast on WVUM 90.5 FM. 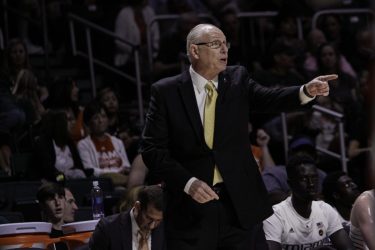