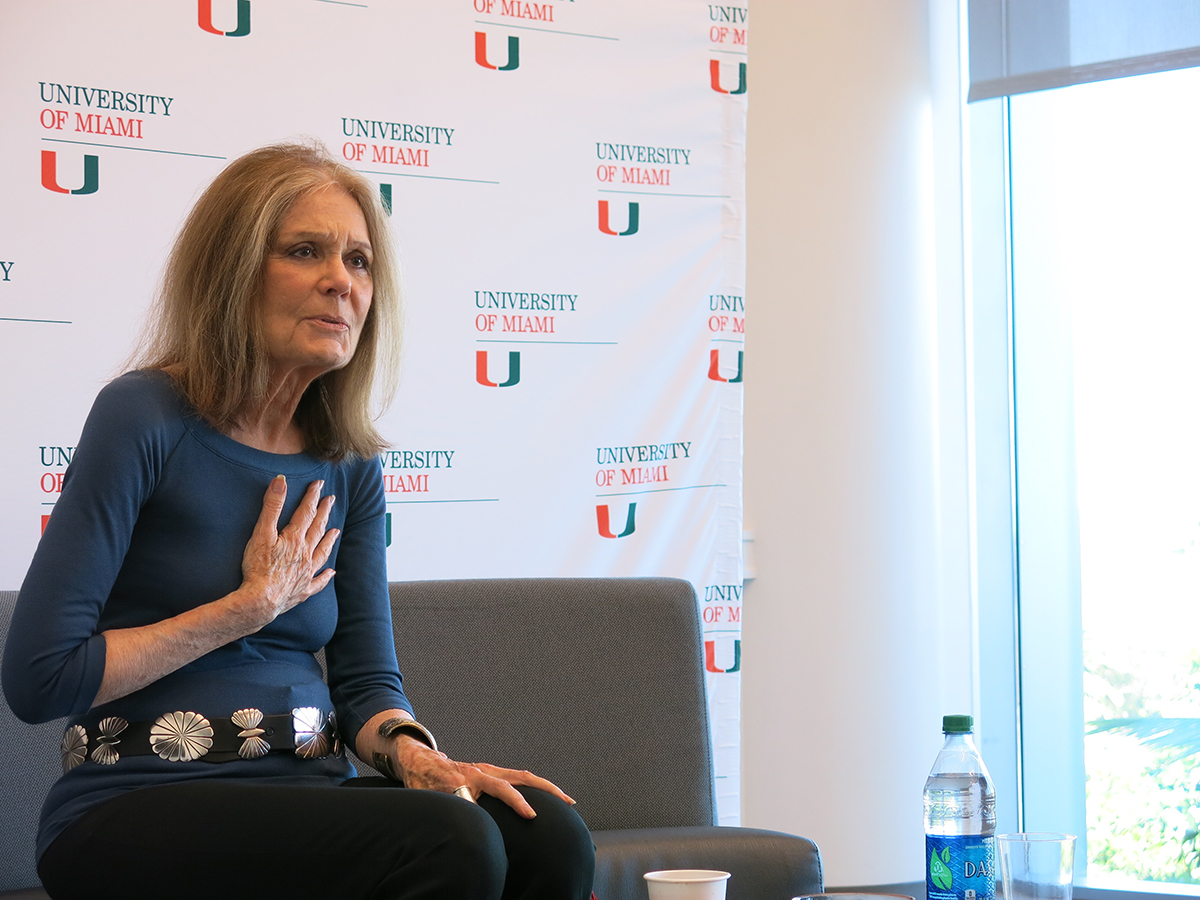 Gloria Steinem, a world-renowned activist whose accomplishments entail authoring several books and founding Ms. Magazine, spoke to the University of Miami Tuesday about global issues of equality and the roots of violence and hierarchy.

The lecture, titled “A Leader’s View of the Modern Women’s Movement,” was sponsored by President Donna E. Shalala and Books & Books. Members of the community, high school students and UM students attended.

Shalala, who referred to Steinem as “an old friend,” introduced the feminist, praising her as “the leader of the modern American women’s movement.” She referenced some of Steinem’s most remarkable feats, including going undercover as a Playboy bunny to expose the injustice and unglamorous side of the industry.

Steinem’s talk centered around some of the biggest issues of modern day. She stressed that change springs from need and described our current position as a time of raising people’s consciousness. Action, she said, is the next step.

“The possibilities are there,” Steinem said. “The answers are there.”

Steinem also addressed recent issues including the Trayvon Martin case and the kidnapping of young girls by the Boko Haram. She said that violence, ranging from senseless crimes to full-scale acts of terrorism, can often be directly traced to domestic violence.

In the case of Martin, Steinem said that George Zimmerman had previously been guilty of domestic violence.

“If that had been taken seriously in the first place, Treyvon Martin might still be alive,” she said.

Steinem also brought up the book “Sex and World Peace,” a look at global violence that was written by four scholars.

“[The scholars] came to the conclusion that the single most reliable indicator of whether a country will be violent within itself, or whether that country will use military violence against another country is not poverty, not access to natural resources, not religion, not even degree of democracy, it’s violence against females,” she said.

Steinem pointed out issues that arise from societies that glorifies male dominance.

“Some men become hooked on this dominance like a drug and feel they are not properly masculine unless they have some degree of this dominance,” she said.

Steinem identified the power associated with wombs and reproduction as being at the root of a lot of violence. She used the example of the Boko Haram, who chose to kidnap young girls over wealthy members of society who could have been held for ransom because these girls possessed the power of reproduction. Steinem also made connections between battling racism and battling sexism.

“I hope that one thing that we have now in our consciousness is that the systems of race and sex or caste and sex are completely, deeply intertwined and you cannot uproot one without also uprooting the other,” she said.

Steinem warned about the societal danger of hierarchy – or placing an order of importance on social issues like racism and sexism.

Ultimately, Steinem felt that we must fight to uproot systems of injustice.

“We have to stop normalizing violence and hierarchy,” she said.

Steinem encouraged people to search out injustice and stressed the power in coming together or forming connections with others who recognize similar societal issues. Humans, she said, are pack animals. She pointed out the strength in groups, saying they can help to inspire change. By simply picking up a newspaper, she said, people can find “threads” of issues to address.

“Those are the kind of solutions we can come to by just following the thread,” she said. “And we can support each other along the way. The good news is that we get born along the way because we find all the unused, unloved, un-honored parts of ourselves and become whole human beings.”