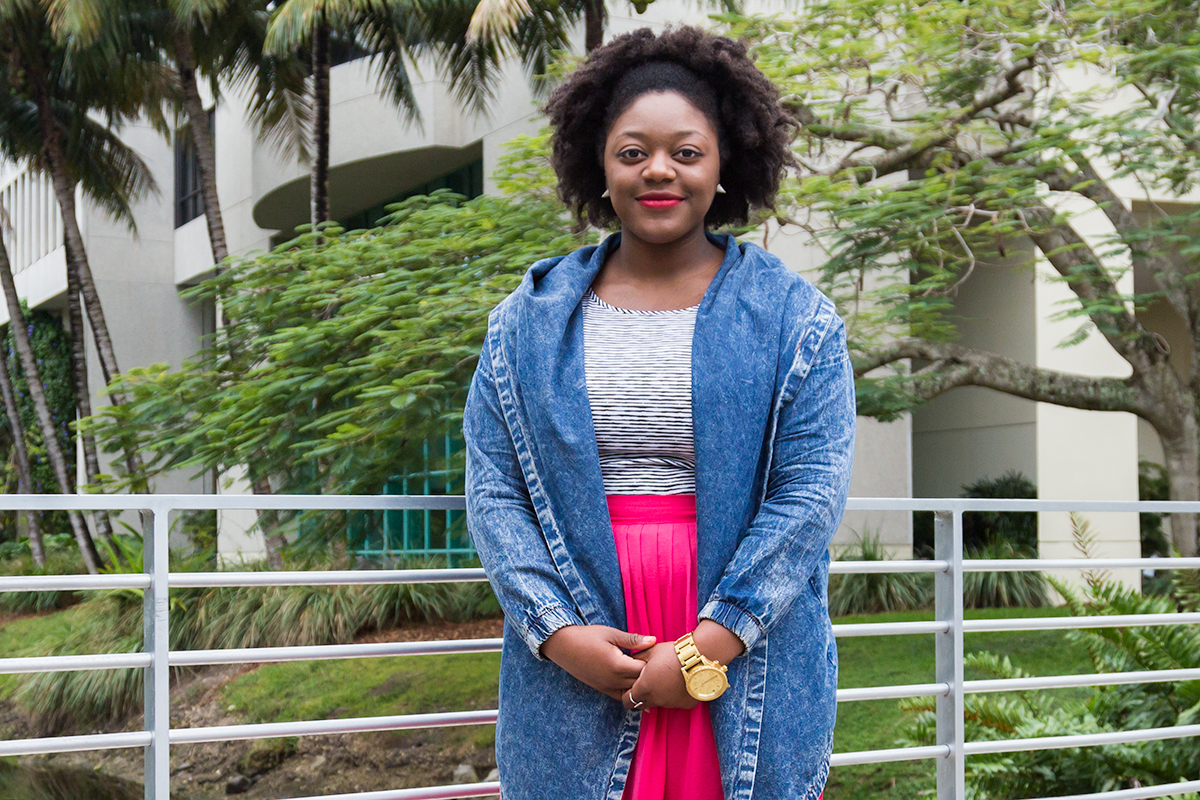 Tucked away behind the audio booth, Elayna Paulk worked as the audio director for the University of Miami’s late-night comedy show “Off the Wire.” Since it was only her first semester at the show, she was more comfortable behind the scenes. One day, during a writer’s meeting, she was encouraged to read a part in a developing skit.

Cheered on by the laughter from the show’s executive producers, she then felt more comfortable contributing and eventually found herself auditioning to be the host of the show.

“I felt like I nailed [the audition],” Paulk said. “It was a lot of fun because, while I was doing the audition, I got some laughs from executive producers; the writers, they were entertained.”

Paulk, a junior studying communications, will star as the first female and black host of “Off the Wire.” The 2015 season will air Thursday with new episodes coming out every other week.

“I feel very honored to be in the position,” she said. “I feel like now that I have stepped into this position, I can inspire other people to say ‘Hey, I can do it too.’ I feel we can come to a place where it’s open to all ethnicities, regardless of wherever you’re from, your gender – open to anything.”

Since Paulk began at the university in the fall of 2014, she was instantly drawn to “Off the Wire” and worked in any position she could, from audio director to technical director.

Paulk, who is looking forward to tackling the role and its many challenges, figured the show’s executive producers trusted her to bring something different to the role.

Stephanie Lorenzo, an executive producer for “Off the Wire,” aimed to make the show more welcoming by looking for a host who was very open and could make others laugh. She easily found that in Paulk.

Senior Robert Glaser has been part of the show since 2011 and Paulk is the fifth host he has worked with. Glaser now serves as the consulting producer, training incoming students to take over for the next season. Glaser believes that Paulk is the right fit for “Off the Wire,” given her ability to connect with the audience.

With this historic appointment comes a new set of challenges for the show’s producers and writers, according to Lorenzo.

Each host develops his own character and the writers always need to write keeping that character in mind. Now, it will be different since they will be writing for a female host, who will present herself and the content in a different way than will previous hosts.

In the past, producers and writers have relied on prior episodes to guide them in certain situations. Now, they will have to find other creative solutions.

“So, that’s going to be a challenge, being completely new and different, and finding that is going to be interesting,” Lorenzo said.

Since the show’s creation in 2003 by Spencer Weinkle, there have been nine other hosts, all of them male. The host usually holds the position for a calendar year spanning from January to December, with the exception of Weinkle, who worked as the host from 2003 to 2006.

The host position is open to any student and involves an application and an audition in front of a panel of executive producers, head writers and consulting producers. The candidates then prepare a monologue or jokes and a reading from previous scripts.

“There was tons of diversity,” Paulk said. “A lot of people that auditioned this time had auditioned before in the past. It wasn’t like it was just white guys, or a certain mold – it was tons of people.”

Since this is only Paulk’s second semester at UM, she was nervous about having less experience than the other seven members who applied for the 2015 host position.

“It was interesting, the feeling that I had afterwards, because it was just like, if it was meant to happen, it will happen, and that’s it,” she said.

Paulk is no stranger to challenges.

Born in Toronto, Canada, Paulk grew up in South Florida and graduated from Cape Coral High School in 2012. She then went to University of Pittsburgh to get a feel for life outside of Florida. However, while she was just into her first semester, the cold weather brought on a sickness that caused her to need back surgery.

Since it was an “easy” day surgery, Paulk believed she would be able to attend school the following semester.

Her plans took a different turn when she got an infection, and she had to take a medical leave from school the following semester.

“Within that time frame, I really dug deep within myself to find that self-motivation and determination to get up, heal, and move forward,” she said. “So  that has taught me to be the person I am now, the self-motivated person that I’ve become was because of that adversity.”

She carried this motivation and belief with her when she transferred to University of Miami. After graduation, she wants to enroll in UM’s dual degree program to earn her Juris Doctor degree and Masters of Business Administration to pursue the field of communication law.

Determined to make the most out of her undergraduate career, she jumped at the opportunities UMTV presented and sees no limit to her abilities.

“I don’t want to put limitations on myself just because I’m a female, just because anything, you know,” she said.

Variety is the heartbeat of ‘Off the Wire’ and changing the format, cast and ideas every once in a while is critical to keeping the show fresh and to welcoming more people, according to Paulk.

Paulk’s main goal for the semester, aside from receiving an email from Oprah Winfrey, is to incorporate more diversity into “Off the Wire.”

This article was edited to reflect a change in the spelling of Robert Glaser’s name.