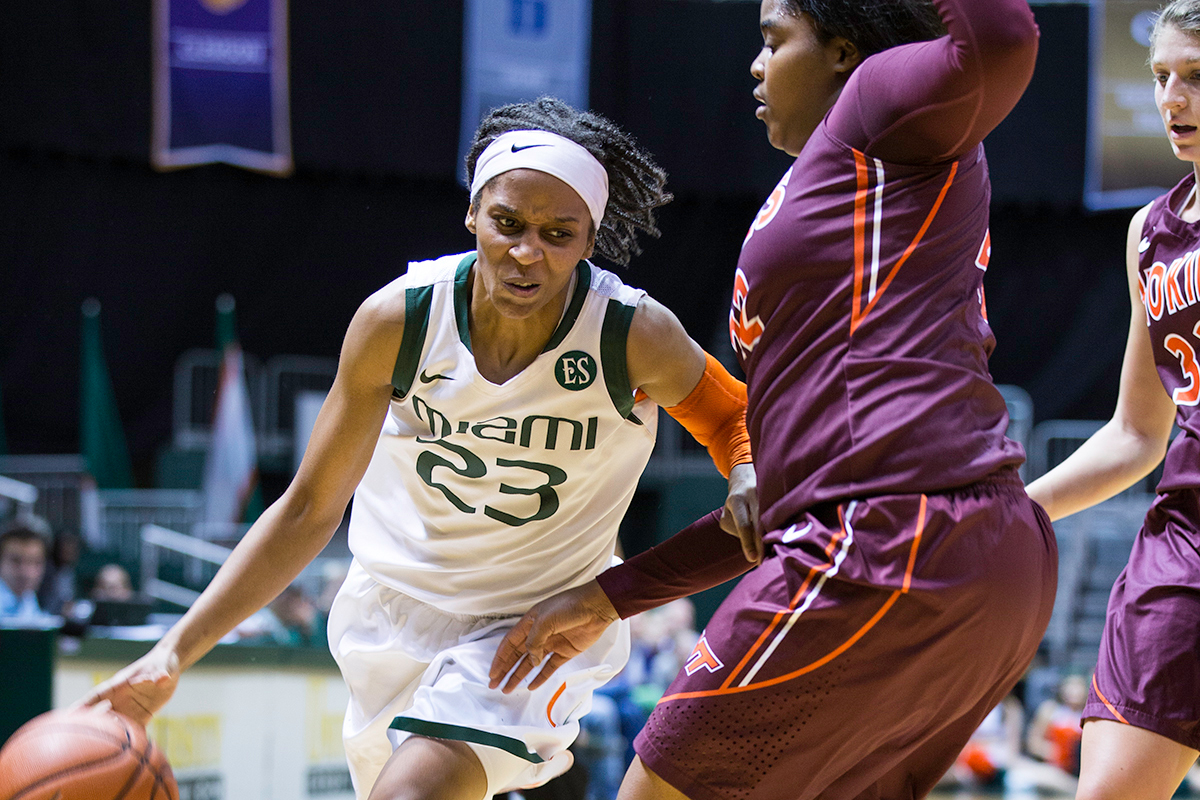 Coming off two straight losses on the road, the University of Miami women’s basketball team returned to Coral Gables determined to end the losing streak. The next opponent on the schedule was lowly Virginia Tech, who was just 1-8 in ACC play entering Thursday’s contest.

The Hurricanes defeated the Virginia Tech Hokies 42-39 in a sloppy game at the BankUnited Center very much defined by missed baskets and turnovers.

“If a win could ever feel like a loss, this is the time,” head coach Katie Meier said.

It was a closely contested game. Both teams started the game ice cold, opening a putrid 1-19 from the field combined. The second field goal of the game came with 14:42 left in the first half. The score was then 4-0, Virginia Tech.

“You don’t usually play like that and win,” Meier said. “That’s the only positive that I have.”

However, the Hurricanes’ miserable play was outclassed by that of Virginia Tech (10-13, 1-9 ACC).

The Hokies shot 15-62 from the field and 2-24 for three-point range. Virginia Tech sophomore guard Vanessa Panousis led the Hokies in scoring with 12 points, but was just 4-19 for the game, including 1-13 from three point range.

Earlier in the week, Meier pleaded students to attend the game, promising pizza and raffling a Go-Pro camera to students. Yet, the students did not respond to the incentive.

Meier’s team came out as flat and lifeless as the BankUnited Center. Freshman forward Erykah Davenport scored Miami’s first bucket six minutes into the game, on an easy put back lay in. The Canes only scored their fourth point of the game after the ten-minute mark left in the first half, yet were down merely 8-4.

Relatively, the offenses exploded in the second half. It took Virginia Tech just over five minutes in the second half to score more points than they did in the entire first period, after Dominique Powell connected on a pair of free throws to push the score to 23-17.

It is customary that a player or two from the Hurricanes will speak after the game, yet none did. Meier said players would not speak because of an impromptu team meeting after an embarrassing performance.

Now, Katie Meier’s squad travels to Tallahassee next weekend to face the rival Florida State Seminoles. The Seminoles are a half game off the pace in the ACC with a record of 8-1 in ACC play. FSU is 21-2 this season. ​