Given that collegiate a cappella groups have been around since the nineteenth century, it is surprising that, at the University of Miami, with its renowned Frost School of Music, a cappella was only born in 2009.

“We all cater to different people, and different styles of music,” said BisCaydence member Mattan Comay.

Although the a cappella scene on UM’s campus has not been as prominent as one would expect, according to Tufaan President Neil Kumar, that is beginning to change.

Last year, Voices of UM emerged as a union of the university’s three groups to foster a cappella on campus.

A representative from each a cappella group sits on the Voices of UM board, and they now also have the advantage of official recognition as a student organization and the ability to apply for funding from the university.

BisCaydence and Above the Keys are attending the International Championship of Collegiate A Cappella (ICCA) regional competition in Orlando on Saturday. (If you recognize that acronym, you can thank the hit film “Pitch Perfect.”)

“I have seen an increase in appreciation for a cappella on campus since ‘Pitch Perfect’ came out,” Comay said. “I can’t say it’s causation, but there’s probably a correlation.”

Usually held in Gainesville in mid-February, the ICCA regional competition Saturday has brought with it some changes that may benefit UM’s a cappella groups. Florida State, whose a cappella groups often come in first, is competing in a different region this year, for example.

“It would be very hubristic of me to say we have a better chance of winning, since UF and FSU won’t be there,” Comay said.

Tufaan was supposed to compete as well — which would have been the first time all three UM groups would compete against each other at ICCA regionals — but the group will not be able to attend due to scheduling conflicts.

Both UM groups have spent the first two weeks of the semester rehearsing more than usual, but junior Nate Ward of ATK said his group likes to compete more for the love of travel than for the sake of winning.

“We’re hoping to place fourth at the competition this weekend,” Ward quipped.

Part of the fun is also sitting back and watching all the talent that the other a cappella groups bring, Comay said.

While “Pitch Perfect” gets the essence of collegiate a cappella right, it doesn’t paint the most accurate picture, according to Comay.

“It’s a lot harder to get to the final competition in New York, and for two groups from the same school to be there would be nearly impossible,” Comay said. “I’ve also never seen people perform with socks on their hands.”

All three UM a cappella groups have always had a working relationship with each other, according to Ward. ATK has hosted auditions with BisCaydence, for example. However, Voices of UM has helped unite the three groups.

“For a long time, we were really separate — all doing our own things, with our own informal advisers,” Comay said.

Kumar added that, in the past, some of the groups were more cordial with each other than others.

While scheduling conflicts would often occur with at least two a cappella groups holding concerts at the same time, Voices of UM has now resulted in concerts with all three groups — the first was held last spring — and has even sparked interest in creating a fourth group for Jewish a cappella.

Freshman Eitan Snyder, a member of Above the Keys, is leading the effort to start up a Jewish a cappella group at UM. With the backing of UM Hillel and interest from several Jewish students in the Frost School, progress is already underway.

Jewish a cappella groups generally perform a blend of American pop music, Jewish religious music and Israeli pop music. But Snyder envisions it being a group that also caters to Miami’s unique audience.

“Since we are a group from Miami, I think we should incorporate more Spanish into the mix,” he said.

Auditions are being held Feb. 1, and Snyder’s aim is to debut the group at the final Shabbat Shalala at Hillel, an annual Friday night dinner with President Donna E. Shalala as a special guest. After six months of being active on campus, the Jewish a cappella group will be able to apply to be a branch of Voices of UM.

“Our ultimate goal is that when my freshman friends and I graduate in three or so years, the group will be stable and strong enough to continue and become a mainstay of not only the a cappella world on campus, but also the Jewish a cappella world across the country,” Snyder said.

Frats take over the Rat on Bid Day
Producer of ‘Avatar,’ ‘Titanic’ to speak at Cosford Monday 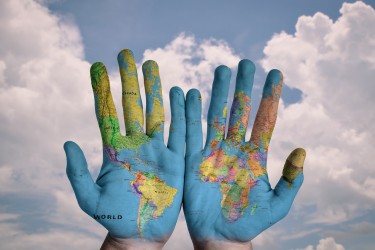