Home » At the Rat, trivia night takes over Tuesdays

At the Rat, trivia night takes over Tuesdays The Rathskeller has been a part of University of Miami tradition since 1973, serving as a place where students go to eat, relax and catch up with friends. It is the place for away-game watch parties, drag shows and happy hour, but some do not know that the Rat also is the setting for intense competition.

The Rat hosts Trivia Tuesdays at 6:30 p.m every week that classes are being held. During the event, teams compete in rounds of general knowledge questions for prizes like Rathskeller gift cards and vintage T-shirts.

What sets trivia nights at the Rat apart is the many teams that show up habitually to compete for the ultimate title of Trivia Tuesday Champion.

“I think Trivia Tuesdays have become a staple at The Rat,” said sophomore Tyler Felts, who participates regularly. “It’s a cool way to just relax, hang out with friends, eat, drink and de-stress. I go to Trivia Tuesdays almost every week just to catch up with friends and have fun playing a game while chilling at the Rat.”

“With the installment of the Rathskeller Advisory Board (affectionately known as RAB), under Hurricane Productions, we identify student leaders to be innovative thinkers when thinking of new events to host in the on-campus restaurant and bar that will encourage students to find entertainment on campus instead of off campus,” she said.

According to the University of Miami Rathskeller Facebook page, Trivia nights date back as far as 2011, when they were held sporadically as “Thirsty Thursday” events. Now, the competition is held on a weekly basis, as it has proved to be popular even amongst Rathskeller staff members.

“Everyone was always really excited about it because it gets a lot more people coming to the Rat, and it’s fun for service, too, because we get to join in and play as a Rat team while we’re doing our jobs,” said Brianna Hathaway, a junior who worked at the Rathskeller during her sophomore year. “It’s just good to have a good amount of the school in the same environment doing the same kind of thing and just having fun together and winning fun prizes.”

According to Stephenson, the event is also a way for student organizations to host fun membership events.

RAB is also responsible for events like dance parties and open-mic nights at the popular student hangout spot. Those interested in joining the student-run organization should contact Julie Earl, RAB Chair, at j.earl1@umaimi.edu. 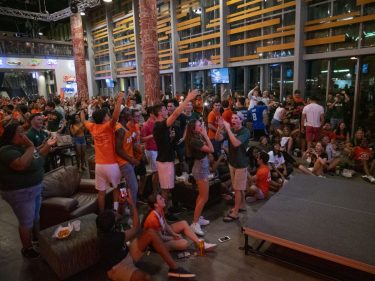