Anna Kendrick stars as Cinderella in “Into the Woods.” The film hits theaters Dec. 25. // Photo courtesy of Walt Disney Studios.

Happily ever after is not always what it seems, and in Disney’s upcoming movie “Into the Woods,” beloved fairytale characters learn that their wishes come with a cost.

Hitting theaters Dec. 25, “Into the Woods,” an adaptation of the stage production, is a contemporary retelling of classic stories that adds a twist on the Brothers Grimm fairytales. Featuring characters like Little Red Riding Hood, Jack and the Beanstalk, Rapunzel and Cinderella, the musical follows a baker and his wife looking to begin a family as they encounter a witch and storybook characters from childhood favorites.

In a conference call with student media, actors Chris Pine and Anna Kendrick talked about their roles in the film. In the movie, they star as Cinderella and Prince Charming. Others in the cast include Meryl Streep as the witch, Emily Blunt playing the baker’s wife, and Johnny Depp as the Big Bad Wolf.

Starring as Prince Charming, Pine said he enjoyed taking the role and making it his own, adding humor and charm to his character.

“Everybody in this film goes through these really wonderfully complex journeys and they experience joy and heartache and sorrow and grief,” he said. “And then my prince is just way more two-dimensional than that, and there’s a kind of a wonderfully self-absorbed person and I think that I had a lot of fun bringing some levity to the picture, or tried to. There’s a bit of a buffoon in the prince.”

Kendrick appreciated director Rob Marshall’s vision of the characters and approached her role in a way that relates to modern women.

“I think the great thing was that Rob really embraced a modern sensibility for all the characters, because since these stories kind of belong to the ages, you know, it makes sense that, in some ways, we update them every generation,” she said. “ And the one thing that he allowed me to do was to sort of, be a sort of over-thinking, over-logical, neurotic princess.”

Both Kendrick and Pine found the singing aspect of the film a challenge, but embraced the opportunity to learn more about singing for such a musical. Pine, who performed the country song “Someday Came Today” in the film “Small Town Saturday Night,” said that singing to the music of composer Stephen Sondheim in “Into the Woods” was a different genre than he was used to, but he had fun taking on the theatrical role and received support from the cast.

“The musical theater genre is very specific, and the sound that you’re going for is obviously quite different than something like the country music I did before,” he said. “But I had a lot of fun learning the ins and outs of the technique and of the genre, and I had a lot of incredibly talented people who had worked in this medium before, from Anna to Meryl and Christine. So I had a lot of fun and a lot of good company around me.”

Kendrick said preparing vocally for the film was much harder than her previous singing role in “Pitch Perfect.”

The film’s theme, Kendrick said, is about parents and children, based on stories that parents have told their children for generations.

“There’s the element where it’s pure fantasy and it’s exciting for kids, and then there’s an element that’s really specifically centered toward parents, which is we have to be careful what we tell our children, and children take lessons to heart, and it’s sort of about understanding that they’re listening to us even if doesn’t feel that way,” she said.

After a month of rehearsals that prepared the cast for filming, a community was formed, Pine said.

“Even though, all of us, we didn’t get a chance to work with everyone, we did get a chance in that month to see one another and to see what everybody was doing,” he said. “And I think that really helped infuse the project with a sense of community and that we’re all kind of on the same page. And I think you’ll hopefully feel that great feeling in the film.” 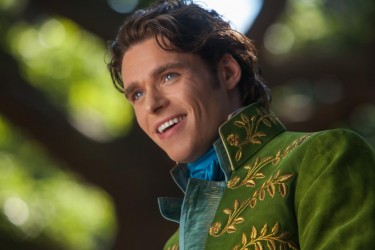 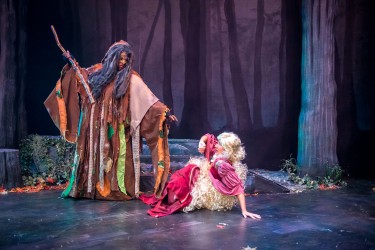 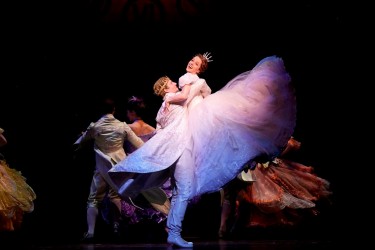