Rock-heavy ‘FOUR’ proves One Direction is not slowing down soon

If the only image you have of One Direction is their chubby, baby faces singing about how you don’t know you’re beautiful, then it’s time to revisit the biggest boy band in the world. The English 5-piece is back, and sounding more mature and rock-n-roll than ever, with their fourth album – aptly titled “FOUR.”

“FOUR” contains all the same catchy, bop-along songs that you’d expect from One Direction, but with a lyrical edge that matches their tattooed torsos and rocker style.

Their melodic voices that breathe poetic lyrics are backed up by strong percussion, guitar riffs, handclaps and even some “na na na’s.” This production style begs for excellence in live performance, and it’s hard to not imagine each track on “FOUR” igniting a stadium concert.

While lead single “Steal My Girl” is a sure-fire hit that gets the crowd on its feet (or at least gets you dancing in your room), other tracks are sure to receive the same kind of glowing, electric reception.

“No Control,” with its cheeky lyrics, “Taste, on my tongue/I don’t want to wash away the night before” is an echoic, ’80s rock-inspired track that makes you wish you had that much power over a boy that he’s “powerless and doesn’t care if it’s obvious.”

While the guys in “No Control” were completely under the spell of the girl, they’re left pining after one in “Where Do Broken Hearts Go.” While the subject matter of wanting someone back after a break up could take a sad, melancholy tone, One Direction turned it into another rock track that you can’t help but sing (and play electric air-guitar) along to.

If you’re looking for a good cry, similar to the tears you shed over “Little Things” or “Story of My Life,” look no further than the Ed Sheeran-penned “18.” Try to keep it together when the boys’ angelic voices sing, “All I can do is say that these arms were made for holding you.” Seriously, when was the last time someone has said something that romantic to you?

The closing track, “Clouds” is a standout on the album for its heavy use of electric guitar, synth vocals and heavy percussion. It’s also the song that sounds the least like the “old” One Direction, but showcases everything great about the band — soaring group vocals, individualistic solo verses for each of the boys, and just enough repetition to keep the song in your head for days on end.

Of course, any fan of One Direction will love this album, but 1D non-believers could find “FOUR” to be not just listenable, but actually enjoyable, thanks to its winning combination of heavy rock influence and addictive lyrics. It’s been four years since One Direction has become a band, and “FOUR” proves that they’re not slowing down any time soon. 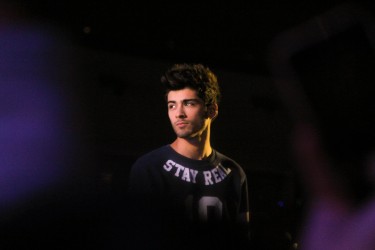