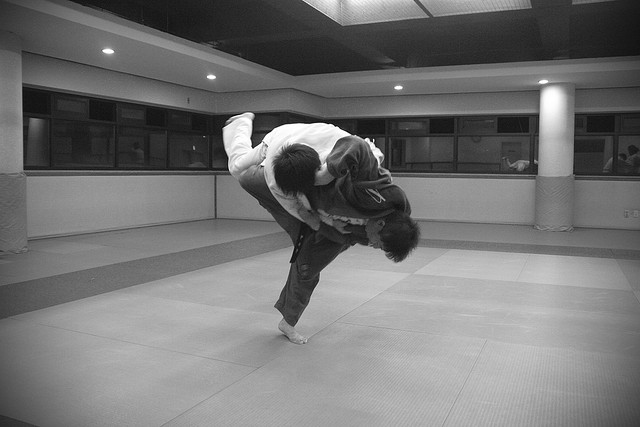 Forty students kicked, stomped and twisted their way out of troublesome situations Monday night. The defensive reactions were part of a self-defense course.

The course was sponsored by No Zebras, an organization aimed to educate the University of Miami community about sexual assault, as well as Kappa Kappa Gamma sorority. Held in the Storm Surge Room, it was led by senior Alana Wegfahrt, a two-time sparring world champion.

Wegfarht led participants in a series of tactics to get out of positions that can result in negative outcomes. Some of the moves taught showed how to escape choke holds as well as wrist and shoulder grabs.

The class was open to both men and women, allowing all students to learn tactics for self-defense.

“When I teach karate at home, it’s girls and boys,” Wegfahrt said. “Men can get attacked by men, too.”

Although the class involved serious preparation for life-threatening attacks, laughter took over the room as students enacted movements for the first time, often with awkward results as they were told to perform tasks.

Senior Melissa Villanueva, who participated in the class, said the twisting moves were the hardest to execute.

“It was actually pretty fun and important,” she said.

In addition to the defense moves, students were given safety tips, such as to remember to run after completing the moves. Wegfahrt advised students against speaking on the phone with a loved one when walking alone in dangerous areas because it is a distraction that poses a threat.

Junior Brenna Riley, president of No Zebras, said self-defense courses are vital for students, especially females, to be prepared to defend themselves in dangerous situations.

“There have been different studies that show 1 out of 3 or 1 out of 5 women are sexually assaulted across the globe,” she said. “Just that alone is enough to need this class.”