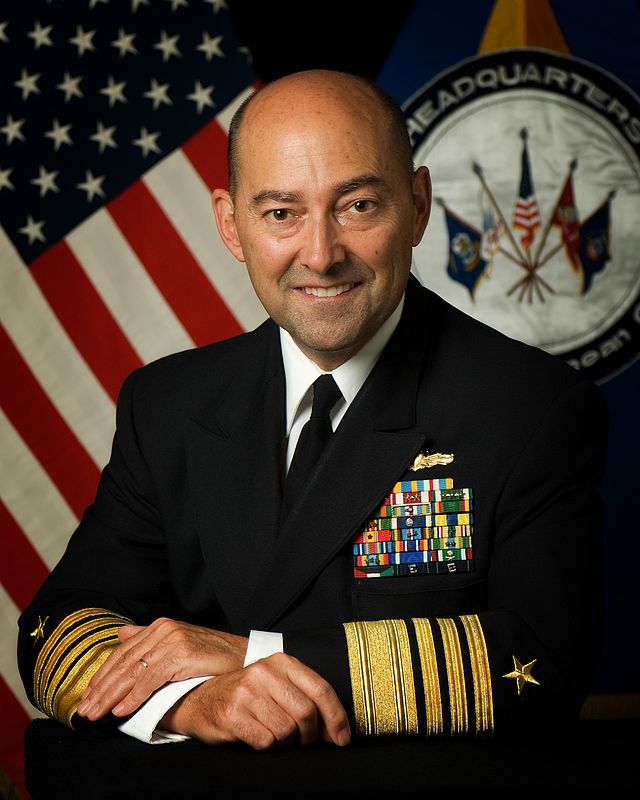 Stavridis, a South Florida native, visited campus Thursday to speak at the School of Business Administration. The former Supreme Allied Commander of Europe of the North Atlantic Treaty Organization (NATO), who serves as the dean of the Fletcher School of Law and Diplomacy at Tufts, spoke at the Cobb Leadership Lecture Series.

Stavridis shared his thoughts on leadership during an interview with The Miami Hurricane.

The Miami Hurricane: You were the Supreme Allied Commander of Europe for NATO, and you went from that, where you were commanding around 3 million men and women in uniform, to now leading a graduate school with something like 700 graduate students. What was that transition like, and how has your role as a leader changed?

Admiral James G. Stavridis: It’s been a wonderful transition. I loved my career in the military, but I particularly enjoy the freedom of the academic world, the interplay of ideas; I love being around bright young graduate students. I could not ask for a better spot for me. And here’s really the punch line: the issues I work with are really the same. As a NATO commander I worked on international security, hard power, soft power, international relations of the United States. And I get to do the same kinds of issues in a graduate school context as the dean of the Fletcher School.

TMH: What specifically is different when you’re a leader in the military compared to in academia?

JGS: The obvious thing is during a career in the military you tend to lead through authority, you tend to lead by the authority of your position; you can direct people to do certain things. But in the context of the academic world you have to lead by consensus. You have to convince people that your ideas are the right ones and help them get to believe in you by the power of your ideas.

TMH: What have you been able to take from your career in the military that you can now apply to academic administration?

TMH: What are some of the leadership tips or suggestions you hope to share tonight?

JGS: The ideas I want to share are the power of collaboration, the idea of alliances and how, by working together, we create security. Above all that we should stop trying to create security by building walls and start trying to build bridges. So that’s soft power and I’ll be talking about that extensively.

TMH: NATO recently suggested there’s been a significant buildup of Russian forces in Ukraine and with what’s going on with ISIS, is that something you believe needs to be employed more by international forces?

JGS: I do. I think that a good example of this is in Ukraine. Rather than a US unilateral response, the correct thing is a global response using the United Nations, any military activity we do through an alliance like NATO, collaboration with the Ukrainian armed forces on the ground those are all using techniques, collaboration, consensus and condemnation of Russia’s behavior but doing it in a global way as opposed to a unilateral way on the part of the United States.

Due to time constraints, the rest of the interview was conducted over email.

TMH: Your memoir is titled “The Accidental Admiral.” Can you quickly explain why it is that you use the term “accidental?” Was your career path unusual for an admiral?

JGS: The title derives from two thoughts:  I was the first Admiral to ever command NATO after a long line of Generals going back to Eisenhower, the first Supreme Allied Commander.  Having an Admiral seemed a bit of an accident in that sense.  Also, in so many ways, all of our lives are a series of accidents – I never set out to be an Admiral, and thought very seriously about getting out of the Navy many times.  But interactions over the years with mentors, the call of service, and lots of luck led me to becoming a Navy leader.  I think most successful people would say their lives have turned on happy accidents, and that was certainly the case for me.

TMH: In a TIME article that you recently wrote, you named some mentors in academic administration who gave you advice during your transition into academia, one of those mentors was University of Miami President Donna E. Shalala. How has President Shalala been a mentor for you, and what type of advice did she have for you upon entering the academic world?

JGS: On President Shalala, her advice was absolutely pivotal to me entering academe after a long career in the Navy.  She encouraged me by pointing out how higher education is a way to continue a life of service, by extolling the joy of being around wonderful students and brilliant faculty, and clarifying a sense that what I had learned in the military – leadership, execution of complex strategies, advocacy and the challenge of leading big organizations – would translate to the academic world.  She also recommended me for my current position as Dean of The Fletcher School at Tufts, and has helped me with advice about listening, building consensus, and strategic planning as I have taken up duties there.  I owe her a great deal, and will always be grateful.

TMH: With President Shalala retiring after the 2014-2015 academic year, what type of leader is UM losing when she leaves?

JGS: President Shalala has been a high visibility national-level leader for U of M, and her loss will be felt strongly in many dimensions – particularly her deep knowledge of the University after over a decade in office.  She brings broad experience in leading complex organizations, a deep love of higher education, and a brilliant mind to any challenge – very hard attributes to replace.

TMH: Finally, there has been a lot of speculation in the media as well as the UM community that you might be a candidate to become the next president of the University of Miami. Would you like to comment on that? And is that something you would be interested in?

JGS: In terms of the university’s next president, I know there will be a vibrant search that will surface a superb array of candidates.  Whoever comes next to the U will be a lucky university president indeed.