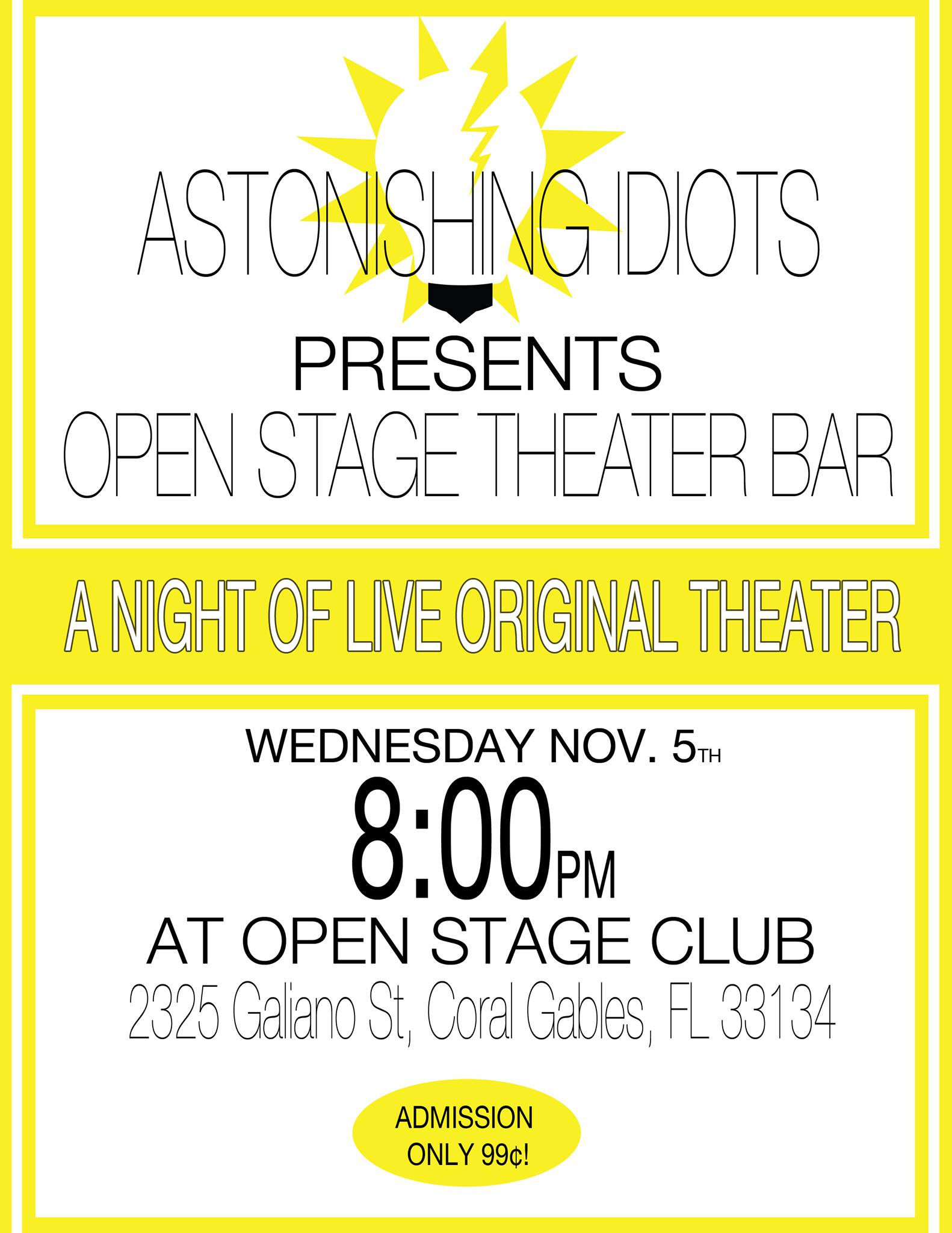 A reformed party animal, a boys’ soccer coach turned pompous mayoral candidate and a zombie with a penchant for Monopoly seem to be unlikely occupants of the same stage. But in student playwriting collective Astonishing Idiots’ inaugural presentation, anything goes, as a parade of colorful characters spanning all genres combined for a refreshingly eclectic evening of performances at the Open Stage Club.

Astonishing Idiots is a new University of Miami-based theatre company, supervised by playwriting professor Oren Safdie, and is expanding beyond the traditional realm of merely reading student scripts in class.

“As young writers and people who want to make art, we just want to make our own stuff and put it out there, to produce and make something real,” said senior Grant Harris, who wrote the monologue play “Coach James” and acted in “A Bro in Mexico.”

The night consisted of seven student-written plays, all based on the prompt “Upper Class Horror Stories.” There was a diverse array of offerings, including both comedies and dramas, with a few pure monologues as well as multi-character scenes. The casts were made up of UM students, and directed by a mix of students and theatre department faculty.

The rehearsal process for the plays was fairly brief, putting the focus on the work of the Astonishing Idiots playwrights.

“They were looking for some student actors, and we read over the scene and chose characters, and Daniel had shown interest in directing, so we quickly just put the scene together on its feet,” said freshman Ian Brininstool of his experience in “Blow,” a dark comedy written by freshman Christian Diclemente. “We only found out about it four days before.”

As in the vast majority of professional productions, most of the playwrights were minimally involved in the staging of their piece.

“Sometimes you don’t always want to end up with just your idea,” said Harris of his decision to step back from this stage of the process. “You want other people’s interpretations to be added on and then it makes it something more than just an idea.”

The work of all of these different groups culminated in an hour of theatre at the Open Stage Club on Wednesday night. Some highlights of the evening were “Playdates” by junior Chelsea Jubis, a comedy about two disaffected modern moms, and “Droll,” a murderous farce written by senior Megan Rico about a snooty British couple confronted with a demonic dilemma.

In the end, Astonishing Idiots’ premier performance proved to be a successful and rewarding endeavor for both the audience and the artists.

“I think what was really cool about this experience was that we were given an original student work,” said freshman Daniel Barett, director of “Blow.” “It was really interesting and challenging to take his words and take all of his thoughts and put all of them onstage…and I think tonight in this final run we all found the language that he was going for and what he was writing, and I think we did it justice.”

The next Astonishing Idiots show will be in December. The group is accepting submissions at astonishingidiots@gmail.com.