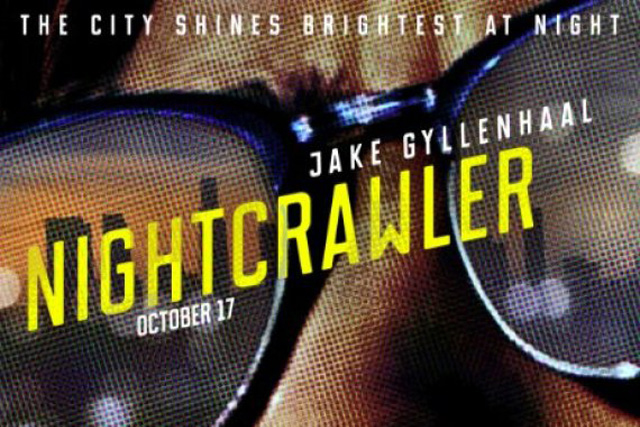 Some movies are best experienced in the theater.  For some, like “The Avengers”, the sheer spectacle can only be captured by the big screen and big sound systems.  For others, like “Lawrence of Arabia,” the scope and scale can be properly conveyed. And yet for others, such as “Nightcrawler,” one needs to see it in a theater for the audience.

The combination of amusement, befuddlement, horror and revulsion evoked by this movie is something that should be experienced in a group.  There were countless moments when the audience would burst into laughter, and then, moments later, stop silent, attempting to process if what they just saw was funny, just awkward, or something far darker.

The film follows down-on-his-luck loser, Lou (Jake Gyllenhaal), as he enters the sleazy, yet lucrative, world of freelance crime journalism.  Speaking mainly in regurgitated platitudes from career seminars, Lou seems off from the beginning.  But as the film progresses, the depths of his cruelty and insanity are explored, and the audience is left baffled whether to laugh, boo or avert their eyes to his horrifying actions.

Gyllenhaal excels in what may be one of the best portrayals of sociopathy ever put to film.  Rounding out the cast is Rene Russo as Nina, the shrill graveyard-shift newswoman who purchases Lou’s footage, and Riz Ahmed as Rick, his beleaguered, naive assistant.  Nina’s blunt indifference to ethics is delightfully sinister, and yet she still manages to make the audience sympathetic as Lou ruthlessly undermines her. Ahmed’s Rick is sympathetic, and manages to elicit pity without ire, a difficult task.

The movie is unflinchingly dark, yet juxtaposes the horrors Lou commits and the bizarre detachment he approaches them with.  It takes beats and inspiration from films like cynical news classic, “Ace in the Hole,” ratings race satire “Network,” and the destructive, monomaniacal craze of characters such as Daniel Plainview from “There Will Be Blood.”

However, the story is firmly a modern one, weaving its story out of the corrosive cultural effects of the current economic recession.  The pacing is solid, and although the film starts fairly slow, events quickly compound and spiral, creating a strong sense of tension.

“Nightcrawler” is a must see.  Clever and cruel in equal measure, it’s the rare film that is both a pleasure to watch in the moment, and will stay with the audience long after departing the theater.