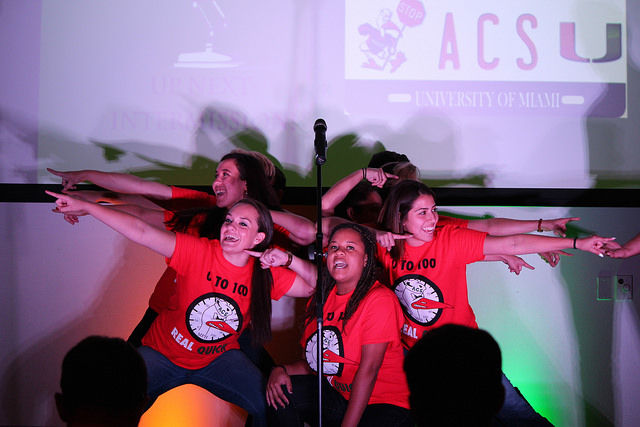 One of the most popular events during Homecoming Week, the preliminary round of the Alma Mater Competition was held in the Student Activities Center ballrooms Friday night.

Each organization sang the traditional alma mater and then changed the lyrics to popular songs to relate to campus life and the upcoming Homecoming football game against the University of North Carolina at Chapel Hill.

Before the event began, participants sang and danced to popular songs including Taylor Swift’s “Shake It Off” and Migos’ “Fight Night.”

“Our alma mater is a tradition,” said senior Sabina Szczepaniec, who sits on the Homecoming Executive Committee. “Being able to see what organizations can do with it is pretty cool.”

Szczepaniec has attended the Alma Mater Preliminaries every year she has been at the University of Miami.

The Chi Omega sorority and Phi Delta Theta fraternity performed together as the first team, remixing Beatles’ songs and the theme from “The Fresh Prince of Bel-Air” television show. The Greek organizations performed in pairs of a fraternity and sorority.

They were followed by UBS, who gave a rendition of Beyonce’s “Drunk in Love.”

FEC and ACS each had a large turnout  to support their teams’ performers.

Sophomore Beja Yman Turner co-chaired the event and helped with the organization and logistics. She stressed the important role Alma Mater plays.

“I always think that Alma Mater is one of the biggest homecoming events because it is the culmination of school spirit,” Turner said. “Everyone enjoys song and dance. Everyone can incorporate their own spirit in their own style.”

In addition to the three groups that moved on to the finals, Hecht Residential College was selected as Judge’s Choice and will perform Thursday as well.

Keep checking back to our Homecoming 2014 page throughout the week.