Self-taught singer and instrumentalist Soko traveled to Miami Beach Thursday to perform a show with Foster the People at The Fillmore Miami Beach.

Soko, a French native, began her career as an actress in France at the age of 16. She then made the jump to music, releasing her first full-length album “I Thought I Was an Alien” in 2012. She grabbed listeners’ attention with her soulful, haunting sound in songs such as “We Might Be Dead Tomorrow,” which was featured in the viral YouTube video “First Kiss.” Soko also participated as one of the 20 people featured in the video.

Now, she is touring the U.S. and in the process of recording her second CD, “My Dreams Dictate My Reality.” Soko spoke to The Miami Hurricane about her decision to pursue music, evolving sound and goals moving forward.

The Miami Hurricane: I see you began your career as an actress. How did you make the jump from acting to music?

Soko: I started acting when I was 16, and I guess I was sort of bored and needed something that made me feel a bit more independent and creative on my own. Since I was such a music nerd and writing all the time and obsessing over music and making up songs in my head all the time, it just made sense to dedicate it a little more time. And it soon became absolutely vital.

TMH: Do you think your background as an actress has had an impact on your music?

S: Well, I’m not scared to open up and be fully true with my music; I can’t lie with it. [It’s the] same as acting and wanting to be as true as possible, so I guess that helps. I’m always really raw and honest and in pain when I play music. I feel it really hard.

TMH: Who would you say are your biggest musical influences?

TMH: How would you describe your music?

TMH: Where do you get inspiration for your lyrics?

S: In the deep end of my dark, wasted mind, and whatever problems I need to unload down to paper and remember forever into a song.

TMH: How do you think your new album, ‘My Dreams Dictate My Reality’ differs from your first CD?

S: Well, it’s produced by Ross Robinson. It’s a lot more punky, ’80’s sounding. It still has very dark lyrics, but sounds sort of more upbeat. [There is] a lot of reverb and chorus-y guitars and [it’s] more epic.

TMH: What are your goals moving forward?

S: Being able to write and record and perform music always and forever. And [to] make more movies, and direct more videos, and get married and have babies and tons of kittens.

Learn more about Soko and where she’s touring next at s-o-k-o.com. 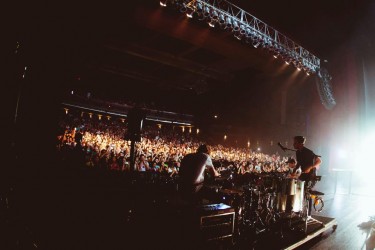