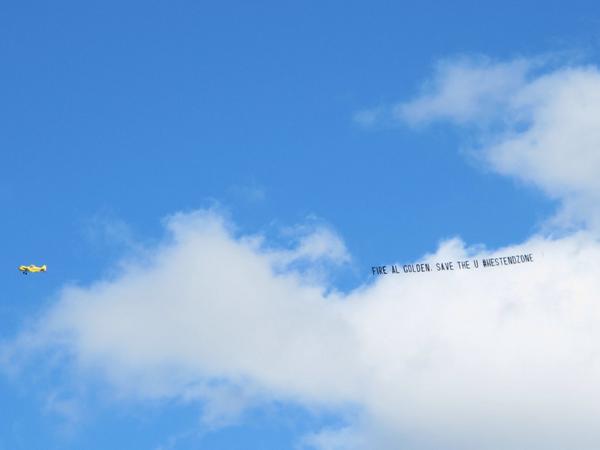 The Miami Hurricanes women’s tennis team played at the Bedford Cup hosted by the University of North Florida this past weekend.

Freshman Sinead Lohan was the star of the tournament, winning the Flight 1 singles bracket. For the victory, she beat UF’s Peggy Porter 6-2, 6-4 on Sunday. Lohan, a native of Ireland, started the bracket with a bang as she defeated the Seminoles’ senior leader Daneika Borthwick 6-3, 6-1 on Friday.

Lohan also made it to the doubles finals with fellow freshman Wendy Zhang. They faced the Gators’ Belinda Woolcock and Stefani Stojik in the final for Flight 1. The journey there had them beating FSU, UNF and FIU.

While fans tailgated before Miami dominated Cincinnati for Family weekend, a banner flew above Sun Life Stadium.  A small plane dragged along a sign that read “Fire Al Golden, Save the U #WestEndZone.”

This is from the same group that started a GoFundMe campaign to raise money for a “Fire Al Golden” banner for the upcoming FSU game.

Students in the front row of the student section still showed up to the game dressed as Golden, headset and all, in support of the coach.