Manuel Lima, a designer, researcher and leader in the field of information visualization, spoke about the history of information design and discussed the visualization of networks during his Thursday night lecture at the School of Architecture’s Glasgow Hall, which was part of the “Places and Spaces” series.

On Friday, Lima sat with The Miami Hurricane for an interview about the field of interaction design and his work as the lead designer for Codecademy, a website that lets anyone access free interactive coding classes in six programming languages.

He also discussed the phenomenon of changing career paths by embracing technological tools, and the way the media has opened up information visualization to a mainstream audience.

The Miami Hurricane: Can you explain what interaction design means to you?

Manuel Lima: Interaction design is a discipline that cares about humans and the way they interact with different products. The way that you interact with it, how you interact with it, what kind of flow you go through in achieving what you want at the end. I think that’s always the emphasis. Whenever you interact with a given product – a mobile phone or a screen, computer, et cetera – you always have a goal in mind, be that to open your contacts, to send an email, to open a new song from your collection. As interaction designers, we have to find the best path for you to achieve that goal in the minimum time possible, with the least distractions.

TMH: What approach do you take to determining the best path?

ML: To achieve that, there’s a variety of processes we go through, from doing scenarios, which tend to be understanding how people go through that process, user flows; we do surveys, we try to put ourselves in the minds of users to understand how they go through that process of achieving that given goal. There’s of course detailed wire frames we end up doing to try to understand the limitations of the layout in trying to complete the steps for you to achieve that goal. There’s a variety of processes, but in the end, it’s always for the user to complete that goal in the least amount of time with less challenges and problems along the way.

TMH: How do you put yourself in the mind of a user? What are some of the elements that you go through in your mind? Do you have a checklist?

When we’re brainstorming every feature for that product, and we think about, “How would Archetype X react in this particular domain?” When we have those segments, we can create particular personas that are in a specific age group, specific education, type of interests. That makes it a lot easier for us to put ourselves in the mind of that user, and sometimes we have user testing and focus groups with those archetypes. We invite into our office users that fit those archetypes and we talk to them. We’re looking to add a new feature, and we put it to the test and we get feedback immediately from those users, and it calibrates our ideas. Sometimes we tend to be a bit more prima donna; we think we’re doing the right thing, but adding that evaluation from real users is the best way to do it.

TMH: How would you say Codecademy has let ordinary people gain the skills to design interactively?

ML: I think Codecademy has played a huge role. I still think it’s like a fairly new start-up, but every time I go somewhere, especially where people are a little more digital savvy, everyone recognizes the name already. I think it has had a huge impact on people’s lives. We keep on hearing stories of people that have literally changed their path due to Codecademy. There’s this beautiful story of a girl in Kenya that actually learned how to code on Codecademy. She became very proficient at it and then founded a series of schools in Kenya teaching kids how to program.

It’s really interesting how Codecademy is becoming a tool for people to change careers. In many ways, I feel like our generation, and maybe you’re going to feel that when you go out into the market, we know that a job is not for life. Our parents thought that way. For our parents, a job was for life. That was the emphasis. You got into a factory or office, and you would hope to stay there for the rest of your days, and nothing else even came to mind. That was just part of the process, getting a job. I think my generation really changed that in a way. You know that you spend a couple of years in a job and then you jump somewhere else because you want to be constantly motivated and challenged.

I think the following generation is realizing not just that a job is not for life but a career is not for life. Even though you might be trained as a journalist, you might realize you might be more challenged or better off or more passionate about being a cook and become something else. I think that career path and those changes are being facilitated by many new tools, including Codecademy. Because if you learn anything through Codecademy, it makes it a lot easier to make that shift.

TMH: What kind of advice would you offer to people just starting to get into the field of visualization and what kind of warnings would you give?

ML: I think it’s really hard to give warning because it’s part of growing up and evolving – you have to learn from your own mistakes. I try to stay away from that approach. But I feel like if you feel passion for the field, if this is something where you feel constantly motivated and challenged and passionate about, just follow your heart and that’s always going to lead to great things.

… Right now is an interesting time for visualization. When I entered the world of visualization, there were only a few blogs that you could count on your fingers. Now there’s an immensity, even blogs on a given topic or special approach or technique for visualizing data. There are immense number of resources and research, if you go to Alberto Cairo’s website, if you go to VisualComplexity.com, and of course books. You have a huge array of books being published in the past five years alone.

TMH: How do you think technology and new software tools have changed visualization or opened it up to more people?

ML: I think media and journalism has played a huge role in that sense. It’s what some researchers call vernacular visualization. It’s becoming such a common currency that everyone can recognize it. For instance, whenever there’s a presidential election, you know all the effort that all media types put in. That plays a huge role in coming up with alternative technologies, different ways of visualizing the results of a given election. There’s a huge emphasis on this right now, especially from the media.

In parallel, I think this emphasis from the media in trying to represent some of these new domains in alternative ways is also educating the general audience in the sense that the visualization of information is not limited to traditional methods and templates. It’s not only bar charts and pie charts; there’s a whole array of approaches you can take. Take The New York Times, for instance, and all the work that they’ve been doing. They have a dedicated team, as you know, on just treating these topics, and I think that ultimately is great because it’s teaching users and contributing to that learning curve on more advanced alternative ways of visualizing information – which we’re going to need regardless, given a lot of the future challenges we’ll have with big data. 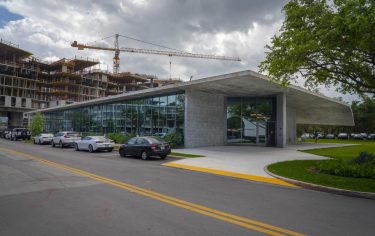