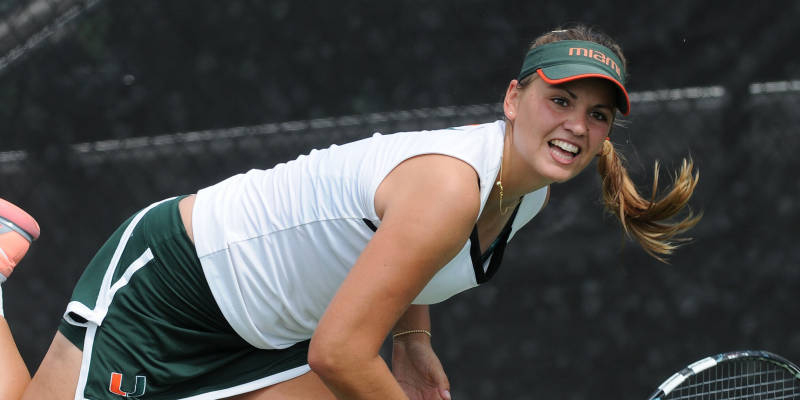 After an eventful summer that included winning the singles bracket in a Gainesville ITA circuit event that led to a No. 9 ranking in the ITA preseason poll, the Hurricanes women’s tennis team walked onto the Cary, North Carolina courts this weekend with confidence.

Three freshmen followed veterans Clementia Riobueno, Monique Albuquerque, and 18-ranked Stephanie Wagner into Duke University’s Fab Four tournament, and they all left with something to brag about.

All-American Riobueno posted one of the most impressive matches, a 6-4, 2-6, 6-3 win over Virginia’s 32nd-ranked Stephanie Nauta. Riobueno went on to lose to North Carolina’s Haley Carter in the third place round.

The dominant, third-ranked duo of Riobueno and Albuquerque continued their superb teamwork with easy 8-2 and 8-3 wins in the early rounds to go on to win the doubles tournament against Mississippi’s Natalie Suk and Zalina Khairudinova. This dynamic duo took the double’s bracket Sunday in an 8-5 victory against Ole Miss.

Wagner and true freshman Sinead Lohan played for the third-place match. Wagner, a junior from Amberg, Germany, advanced to the final round of singles play after two commanding, straight-set wins in the first and second rounds. She ousted No. 14 Brianna Morgan of Florida for the Singles Final gold.

Freshman Wendy Zhang started her college career strong, picking up two wins against Furman’s Karlee Bryde in straight sets and North Carolina’s Marika Akkerman 7-6(1), 6-1. The China native would then go on to out-duel another Furman Paladin – this time being freshman Ansley Speaks.

The Hurricanes will play in invitationals and regional tournaments until the regular season starts in January. Last season, they went 21-6 in head-to-head matches, including a 10-game, month-long win streak that constituted of eight ACC teams.

The Canes will host their next match on Sept. 19 for the Miami Fall Invite.