Patio Jams is a program that brings local artists to perform from 12:15 to 1:30 p.m. every Thursday at the Patio.

Vivid Illusion is manned by a six-man crew, all juniors and (some super) seniors in the university’s Frost School of Music.

The band itself is a recent invention. Last year, senior Conner McCullough decided to complete, produce and release “The Cyclical Nature” ideas and arrangements, which he had been working with since high school.

After the album received significant attention online, McCullough needed to find accompanists for a live act, or to “aid [him] in his quest for musical domination,” as he put it.

This led to the addition of his five bandmates. Of the six, three are guitarists: McCullough, Max Molander and Anthony Toboada. Jackson Firlick will bring the grooves on drums. Steven Gizzi will contribute keyboards and Mike Gardell will sustain the low-end on bass. Gardell and Taboada will also bring the anticipated vocal additions to the band’s flavor.

Vivid Illusion is also incredibly diverse musically, personally and even geographically, as they are from all corners of the country.

“We all listen to a lot of the same music and a lot of other stuff on our own,” Molander said.

That fusion lends to their unique sound.

“We’re each a different kind of hipster,” said McCullough.

Now with more members, the creative process has accelerated, and songwriting and arranging have become cooperative efforts.

Vivid Illusion follows no musical canon. Although there are evident, metal roots behind many of the instrumental aspects, I classify the band as more atmospheric or ambient than anything else.

The sound is vast. On their first, purely instrumental album, “The Cyclical Nature,” colossally-layered guitar riffs float on sprawling drum beats and urging bass-lines, all accented by soaring synths, which hoist the music to its ephemeral plane.

The music is elemental, it’s fundamental and it’s transcendental. McCullough shaped the album around ideas of the universe and how it constantly recycles and refashions itself to create new from old.

Every instrument and arrangement evokes this image. My only shtick would be to hear a bit more boom from the drums here and there, but altogether, a laudable production.

But that’s not all – Thursday’s show will deviate from their first album. The band has rearranged songs to make them more compatible with a live, outdoor show. They’ll also bring some previews from a new, under-construction album and several covers of songs.

Listen to the album “The Cyclical Nature” at vividillusion.bandcamp.com 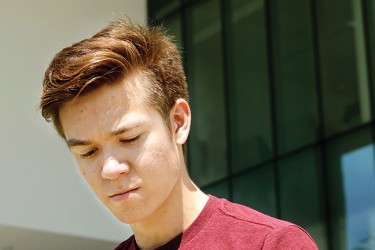