After her Medicaid services were taken away once she turned 21, senior Audrey Winkelsas, who has spinal muscular atrophy, was unsure of how her education at the University of Miami would continue.

Last month, she received the news that she will be receiving 24-hour care for the 2014-2015 academic year, allowing her to complete her undergraduate degree and graduate in May 2015.

Now, Winkelsas is looking for a few students who can act as her personal care assistant throughout the school year.

“Many people with disabilities like myself cannot have physically demanding jobs,” Winkelsas said. “Instead, we need careers that utilize our mental abilities, and to do that we need college degrees.”

One of the biggest challenges Winkelsas faced as a result of the changes in her benefits was a lessening of attendant care.

When senior Gabriela Lins saw the Change.org petition on her Facebook newsfeed, she felt a connection. Lins works as the vice president of United Against Inequities in Disease (UAID) at the university. She shared the page and encouraged her friends to sign the petition.

Later that week, Lins saw Winkelsas and her mother near the library and approached them. She explained that she felt passionate about the situation and wanted to help raise awareness on the issue.

Winkelsas is in need of student assistants who are responsible, committed and can dedicate at least a couple of 8-hour shifts, according to Lins.

“She is an absolutely brilliant and wonderful person who only deserves the best care,” Lins wrote in a post on Facebook.

Winkelsas requires 24-hour attendant care during her time at UM, however Medicaid’s policy changed Winkelsas’ benefits to three, one-hour nonconsecutive visits per day once she turned 21.

“I wish I could have woken up on my 21st birthday and no longer had spinal muscular atrophy,” Winkelsas said. “But the fact is 21 is just a number, and turning 21 doesn’t mean I need less assistance with my activities of daily living.”

Winkelsas’s mother took on the role to provide attendant care while she continued her classes and appealed to regain 24-hour care.

“A couple of times Medicaid said the only solution would be for me to move into a nursing home,” Winkelsas said. “After exhausting all government agencies and contacting government officials about the problem, I felt no choice but to start the petition.”

Last spring, she began a petition on Change.org in an effort to restore the services necessary for her to continue her education. The petition brought awareness to flaws in the policy and received support from the UM community with more than 7,000 signatures.

Winkelsas’ mother appreciates the support and is looking forward to seeing her daughter cross the stage, diploma in hand.

“Last year was tough on our family, but the support shown by Audrey’s UM family was really heartwarming,” said Winkelsas’ mother. “We’re proud of Audrey’s determination, and grateful that she is going to be able to finish her degree here at the U.”

To apply for the assistant position, email a.winkelsas@umiami.edu.

CPR Day teaches how to save lives
Dear V: Tailgates are not for the lightweight 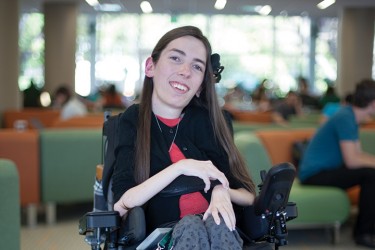 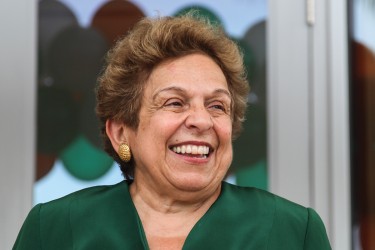