Home » KAOS breaks it down for dance group hopefuls

KAOS breaks it down for dance group hopefuls Junior Marisa Monaco began her warm-up routine by stretching, performing splits and preparing herself for an intensive two and a half hours of choreography and dancing.

As soon as Ed Sheeran’s “Don’t” started blaring from the speakers, her eyes were focused on the prize: earning a coveted spot in one of the University of Miami’s dance groups.

Dripping with sweat, she glided and popped in time with the music, hoping to freestyle her way into KAOS, the first coed hip hop group on campus.

“I’m obsessed with them,” she said. “I joke around with them all the time that I’m their No. 1 fan. I love watching them. I scream and cheer every show. Last year their showcase was on my birthday too, so that was awesome.”

This was Monaco’s third audition for KAOS, and she was just as excited as her first time.

“I love it. I’ve always been dancing my whole life,” Monaco said. “I have friends on the team, so I just do it for fun. I like the thrill of auditioning.”

Every semester, KAOS members hold auditions to welcome new talent. Auditions are usually preceded by an open dance clinic, where KAOS teaches choreography and shows students what it takes to be a member. This fall, the clinic took place Aug. 31, and auditions were held Sunday at the Wellness Center.

“I came to the clinic to have a good idea of the type of dance they’ll use at auditions,” said Adaora Ewulu, a freshman who auditioned. “I also wanted to feel more comfortable around the people I’ll be dancing with.”

KAOS member Halima Dodo taught the clinic and showed students that in KAOS there is no kidding around – it takes serious talent, sweat and passion to keep up with the group’s energetic moves.

“It was really fun,” Dodo said. “At first I could tell they were a little bit like, ‘Oh no, this dance is so hip-hoppy,’ but it was good. Toward the middle and the end they were really doing more, giving me more during the dance and stepping out of their comfort zones.”

According to KAOS President Fareed Rifai, one of the best things a dancer can do when auditioning is focus on the performance aspect of the routine. Since all KAOS dancers come from different backgrounds, each person brings his or her own style and flare to the choreography.

“A lot of us have been trained through hip hop studios, but a lot of people have just learned by teaching themselves, watching YouTube videos or doing street styles,” said Megan Bullock, KAOS member.

While many members have prior dance experience, it is not required to be a part of the team.

“A lot of people think that KAOS is only for professionals or experienced dancers, but we’re really looking to bring in people who just dance and just have that energy, that passion for dance,” Dodo said.

More than 40 people auditioned for the club this semester and, according to Rifai, there is no set number of open spots.

Students were put to the test when they had to learn a routine, present it and freestyle in front of KAOS members.

Ewulu was one of the less than 10 dancers to have made it to the final round of auditions.

Just before 5 p.m. on Sunday,  KAOS announced on its Facebook page that it had accepted five members into the group.

Look out for KAOS: 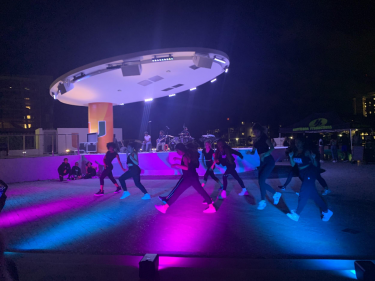 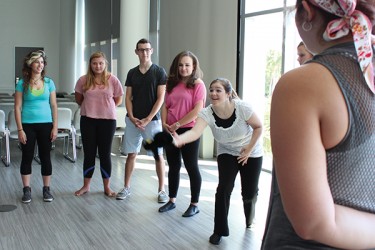