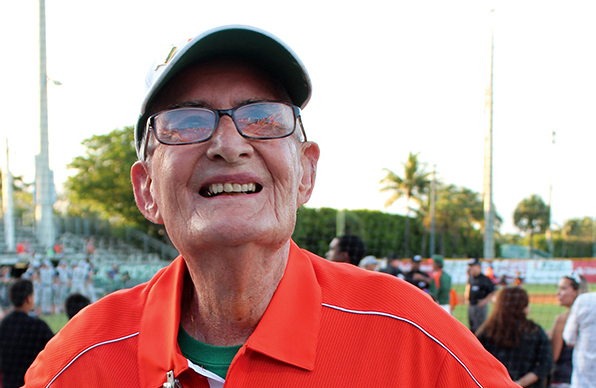 Watching a ball game at UM’s Mark Light Field feels more like you’re at a mom-and-pop operation than a major university’s stadium. The fans have been going for years, sit next to each other at every game and usually have a legendary milkshake in hand.

Likewise, many of the baseball security staff members have walked along the field level concourse for decades. To some, they might just be the guys who check tickets and move on, but one in particular – Hap Pate, 82 – takes his job very seriously.

Long before the first pitch of a Sunday afternoon game against Virginia in late March, five or six ushers, all wearing the same white UM polo, convene for a pre-game meeting.

Pate is different from the other baseball staffers. He’s a little shorter, older and maybe wiser.

He checks tickets as a volunteer gig to get out of the house every now and again. Even after 12 years on staff, Pate treats his job as seriously as a rookie cop on his first traffic stop.

He still has a spring in his step and wears a smile on his face, recognizing the same season ticket holders three rows behind first base. If Pate doesn’t recognize someone, nine times out of 10 he’s correct in assuming they don’t belong there. But he’s not there for a power trip.

“I do what I do because I like people. I really like it when they come to see us play. I try to make them feel welcome,” he said.

Hap’s a man of five-foot-six, who looks a little shorter wearing a baseball cap with the “U” pulled low on his brow. Underneath the hat, there’s a preview of his snow-white hair and glasses sitting on a wrinkled nose that looks like it’s seen more than its 82 years. He wears the standard uniform of a UM polo and long cargo shorts, which hang below his knees, and the classic “over 65” look: high white socks.

Pate’s involvement with UM runs much deeper than his time working security.

Henderson Alton Pate (H.A.P., which is what he has been called his whole life) was born in Virginia in 1931. In an era where service for God and country was highly emphasized, Pate graduated high school a semester early and enlisted in the Marine Corps, transferring to the Air Force in January 1951.

He was stationed in Tripoli at Wheelis Air Force Base during the Korean police action. Pate described a Libya very different from what’s on the nightly news today.

“Very calm, the weather was just like South Florida … There was no war, no problems … and no trouble,” he said.

But his true passion was broadcasting, which he discovered while serving in the Air Force. Instead of being sent to fight in Korea, Pate auditioned for the Armed Forces Radio Network and wound up being a better fit behind the microphone than in the trenches.

Known as Hap Henderson on the air, Pate worked different shifts from dawn to dusk with a combination of music and personality.

“They auditioned me when I was in Tripoli … they wanted me to entertain the troops and keep them informed,” Pate said. “When I was in the Air Force, I took some advanced courses while I was serving, and one of them was communications. I liked it, and I knew the University of Miami had a good School of Communication so when I got discharged I came down here to go to school.”

Pate enrolled in 1954, but his military service continued as he joined the Air Force ROTC.

He was an active student in and out of the classroom. Pate was awarded spots in two national communications fraternities: Alpha Delta Sigma for advertising and Alpha Epsilon Rho for radio and television. His social fraternity was Sigma Alpha Epsilon, which elected him president in 1957.

The UM intramural sports program can also be owed in a small way to Pate. In 1955, he assisted Norman “Chink” Whiton with setting up Miami’s original IM program. He vigorously worked toward a degree in radio, TV and film, completing his 120 credits in three years instead of the standard four. At the time, television was a new medium exposed to the public for less than a decade. Even in its infancy, Pate said he still had to learn its intricacies for the future.

“Radio was the thing at that time, television was very minor but we still had to learn how to work in television if we got the job there,” he explained.

He started out on-air at WQAM and worked his way up to sales, which is where Pate made his real bones. He became sales manager and later got a competing offer in 1970 from a station in Charlotte, N.C., where he became vice president and general manager. In all, Pate worked in commercial radio for 35 years.

These days, the 82-year-old staffer patrolling Reserve Sections A through C at “The Light” shouldn’t be mistaken for a lonely old man. Pate met his wife, Nancy Chivers, on campus while still a student and they were married in 1958.

Together they have three children, six grandchildren and two great-grandchildren. In the 57 years since his graduation, Pate said he still enjoys being involved with his alma mater and feels a strong connection as a Hurricane.

“He’s a wonderful person … He’s smart and he knows how to talk to people, and that’s important,” said Jerry Leidner, who has worked as a parking attendant at the stadium for 13 years.

One of Pate’s colleagues out on the field, Randy Atkinson, also related his people skills to what a representative of UM should be.

“He’s very friendly, very outgoing to the fans and very helpful to them,” Atkinson said. “[He’s very good at] helping and assisting them [the fans] with any problems they might have with their seating and giving out programs.”

Pate has earned respect from his colleagues and members of the university community, but he remains humble and proves that age is just a number.