Juniors Micah Nellessen and Mason Schecter do not smoke. But at 2 p.m. Friday, they were sitting on the Rock’s steps proudly inhaling the secondhand smoke of the group of students who gathered to deliberately disobey the smoking ban on campus.
“We just want to go back to the old system,” Nellessen said. “That way we can keep the smoke contained to certain areas, and if someone doesn’t like the smoke, they can avoid those areas. A lot of us are non-smokers, and we are not condoning smoking. But it’s our right to choose.”
Student Government passed the Breathe Freely campaign two years ago after conducting a campus-wide poll. Last year, smoking was banned on campus except in designated smoking areas. There was an initiative to promote smoking cessation classes to students and faculty before the smoking ban went into effect at the start of this semester.
Now that the campus is smoke-free, students looking for a quick drag must retreat to the sidewalks that border the school on Ponce de Leon Boulevard and Campo Sano Avenue because they are technically not on school property.
Students and faculty are responsible for enforcing the policy. The police department does not handle on-campus smoking.
“A UMPD cop can’t stop a student that is smoking on campus because it’s not against the law to smoke,” said Gilbert Arias, assistant vice president for student affairs. “It’s a state law to not smoke indoors, but this new policy is something we have to police ourselves.”
According to Arias, the first time a student is caught smoking on campus, he or she is given a warning. The second time they will be issued a written notice and sent to the Dean of Student’s Office.
But according to Nellessen and Schecter, that self-policing plan has not been successful.
“When I see someone smoking on campus now, it puts me in an awkward position to say something and I don’t,” sophomore Zoe Kafkes said.
And to prove their point, Nellessen and Schecter and few of their friends who are not affiliated with any club or organization casually smoked their cigarettes in the middle of campus. They held signs stating their message, and even if some students were weary about the smoking, many signed the petition.
In the one hour students smoked, no student or faculty member asked anyone to stop. However, there were a few faculty members who stopped by to sign the petition against the smoking ban. More than 500 people have signed it since Friday afternoon.
“It’s a right to smoke,” said Rodovaldo Lopez, a broadcast engineer for the School of Communication, after signing the petition. “If you don’t like smoking, you don’t have to smoke, but to tell me to stop, well that’s against my rights. Keep fighting!”
Regardless of secondhand smoke and littering, the university is making a statement about the harmful effects of tobacco. The ban of e-cigarettes has been particularly controversial as it exudes only water vapor.
“The message is to educate students that smoking is bad for your health,” Arias said. “The reality is any type of smoking is bad for you, and e-cigarettes is just one form of smoking.”
Nellessen and Schecter hope to collect enough signatures to meet with someone to talk about changing the policy.
“No one is happy with this new policy,” Nellessen said. “It’s not being enforced, people are littering their butts, and it’s insensitive to other cultures. I’m afraid that the school is so vested with Tobacco Free Florida that they will just ignore us, but we just want to open up the discussion again.” 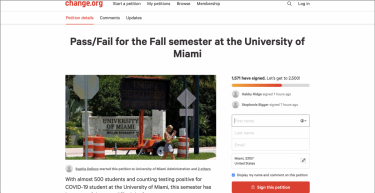