Home » UM’s sexiness beats out that of academic competitors

Blogs, Quinlan vs the World

UM’s sexiness beats out that of academic competitors

One of my personal favorite topics is how our university stands relative to its peers. These are dynamic times in which to be a Hurricane, and it’s important to stand back and reflect on our progress every now and again.

But who exactly do I mean when I refer to “peers?” Our Faculty Senate maintains a list of “aspirational peers;” schools that the University of Miami looks to as benchmarks to reach in academic improvement. These include: Brandeis, Carnegie Mellon, Case Western Reserve University, Emory, NYU, University of Rochester, University of Southern California, Tulane and Vanderbilt.

I could get into some of the metrics about graduation and retention rate and what the real-world implications of those things mean for you, the student reader. Fortunately, there’s a different ranking that is of much more importance and reflects on our school far better. The Daily Beast, using metrics from College Prowler (an apt name), released its rankings of “Sexxxiest” Colleges.

The numbers reflect the ratings of hotness for men and women. But remember, you crazy kids, it also (thank god) includes Trojan’s annual Sexual Health report card, so wrap it before you tap it. It’s for the prestige of the alma mater, after all.

And just what exactly do the data have to say about that prestige?

First and foremost, we came in at a strong eighth nationally. We had a 9.5 (out of 10) ranking for men and 9.43 for women, which can be confirmed by the obscene amounts of time and energy expended by the student body at the gym.

Unfortunately, though, we had a weaker 31st for sexual health. I’m not saying that if you have sex, you’ll get pregnant and die, but it’s simple stuff to stay educated and healthy.

More importantly, what about the bragging rights to friends at other schools?

Yes. We are the highest ranked in Florida (as in most things), beating out Florida (13th) and Florida State (17th). Apparently the Seminoles’ disregard for protection isn’t just a physiological problem; it’s affecting their standing.

And those peer schools I mentioned in the beginning? They may have us beat on incoming SAT scores and research funding, for now, but we are sexxxier than eight of the nine.

USC doesn’t use as much protection, but has more attractive students. Unbelievable, I know. Obviously, the only way to respond is to have as much plastic surgery as the fine students of USC.

Finally, a note: The “other” Miami (which sources tell me is somehow in Ohio; they don’t even have beaches in Ohio!) came in at second nationally. That hurts.

Global Slavery is still a problem that affects more than 30 million people, and the first comprehensive map of the number shows the majority in developing nations like China, India, Russia, but still, an estimated 50,000 slaves in the United States. –Tim Fernholz in The Atlantic

The good news for those lamenting the rise of politically homogenous and polarized America is that we still interact to a good deal with those with differing ideologies. –John Sides in The Washington Post

JP Morgan Chase has to pay $13 billion in the largest financial settlement ever, and the largest case responding to the role of international banks in causing the 2008 recession –Peter Eavis and Ben Protess in The New York Times

Clearly, the most important story is that Trader Joe’s has come to town; students should take note of the “low-cost wines and uncommon inventory” – Miriam Valverde in Sun Sentinel 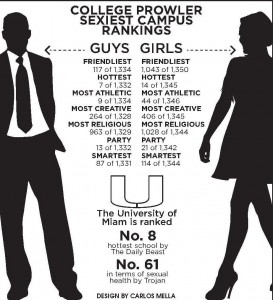