When it comes to the Miami music and culture scene, nothing’s free. Ultra tickets cost $300 for the weekend; a performance at the Arsht Center can cost $40 or more; even a tour of the Wynwood Art Walk costs $20.

This is a rough reality to face for fans of the arts – especially when they’re broke college students. But for those who still want to have a good time and expand their horizons without breaking the bank, there’s Big Night in Little Haiti.

Big Night in Little Haiti is a cultural event sponsored by the Rhythm Foundation, a South Florida nonprofit organization. It is held every third Friday of the month from 6 to 10 p.m. at the Little Haiti Cultural Center (LHCC).

The second you walk toward the LHCC’s courtyard, you will be swept up by the energy of the crowd and the music. Starting at 6 p.m., the center is crowded with people of all ages, dancing and eating.

There are several bands and DJs featured during each event. In the past, acts have included notable Haitian bands like Tabou Combo and T-Vice. Many of the bands play kompa, a Haitian musical style similar to meringue.

Big Night in Little Haiti also provides the opportunity to explore the LHCC.

The gallery is open during the event and features a rotating art show. There is a room where kids can go and participate in crafts during the show. Outside, there are vendors selling sorbet and Prestige beer, as well as a station where you can get authentic Haitian cuisine.

Adam Ganuza, the production coordinator for the Rhythm Foundation, explained that he hoped the event will help “fight back against the mal-impression” that surrounds Little Haiti and “get as much mileage as possible” out of the picturesque LHCC. 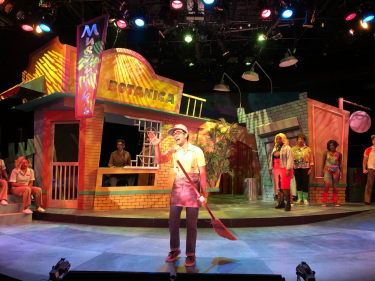