We are currently sailing on our way to Lisbon, Portugal from Dublin, Ireland. Dublin was a tough port to leave since the fun we had there seemed to be shared by everyone.

It was hard for me to wave goodbye to the Dublin port – I had four jam-packed, awesome days there. To make the time there even better, the Emerald Isle was sunny for nearly the entire time. It was definitely the best time I’ve had in port so far because I was able to explore a vibrant city as well as make it out to Ireland’s stunning countryside.

One of the highlights for me was taking a trip to the Cliffs of Moher and the town of Galway, which are both three and a half hours directly west from Dublin. The highway winded through hills of green pastures scattered with cows, sheep and horses. This was the simple life. On average, each village we passed had a store, a school and two pubs. Our tour bus looked quite out of place as it pulled off the highway and navigated through the windy roads up to the cliffs.

The Cliffs of Moher were essentially fogged in, blanketed in a thick cloud cover. We could hear the waves crashing underneath us, but it was nearly impossible to see the cliffs besides their outlines, and the whipping wind did not help much, either. My friends and I took the experience as one where we could simply experience authentic Ireland weather, but we were still a bit disappointed.

Next we made our way to the town of Galway, a quaint fishing village equipped with all the necessities: shops, pubs and a local street market. Walking down the cobblestone streets felt a lot like taking a trip back in time. We could smell the salty ocean air as we weaved through a local street market.

Back in Dublin, I spent time exploring the streets of the Temple Bar, which is known as the most cultural area in the city. Pubs and shops were constantly bustling with tourists and locals alike. The last night we were in Dublin, the Gaelic Football championship game was being played. I learned that this is the equivalent of our Super Bowl, and that Gaelic Football is a mixture of rugby and soccer.

Some friends and I cheered on the “Dubs” at The Bleeding Horse, a popular pub for locals. Since Dublin was one of the teams playing, the fans were out of control with excitement, nearly everyone sporting their light blue and navy jerseys. It was incredible to be a part of this special day, especially because Dublin won. To be in the winning city at the time of the victory was an experience I will never forget.

It seems Semester at Sea has lent some of its own Irish luck to the city that had been so warm and welcoming to us. 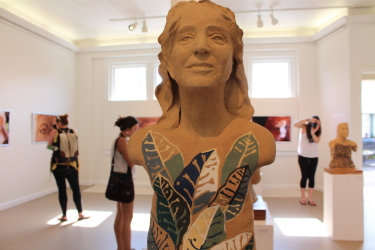