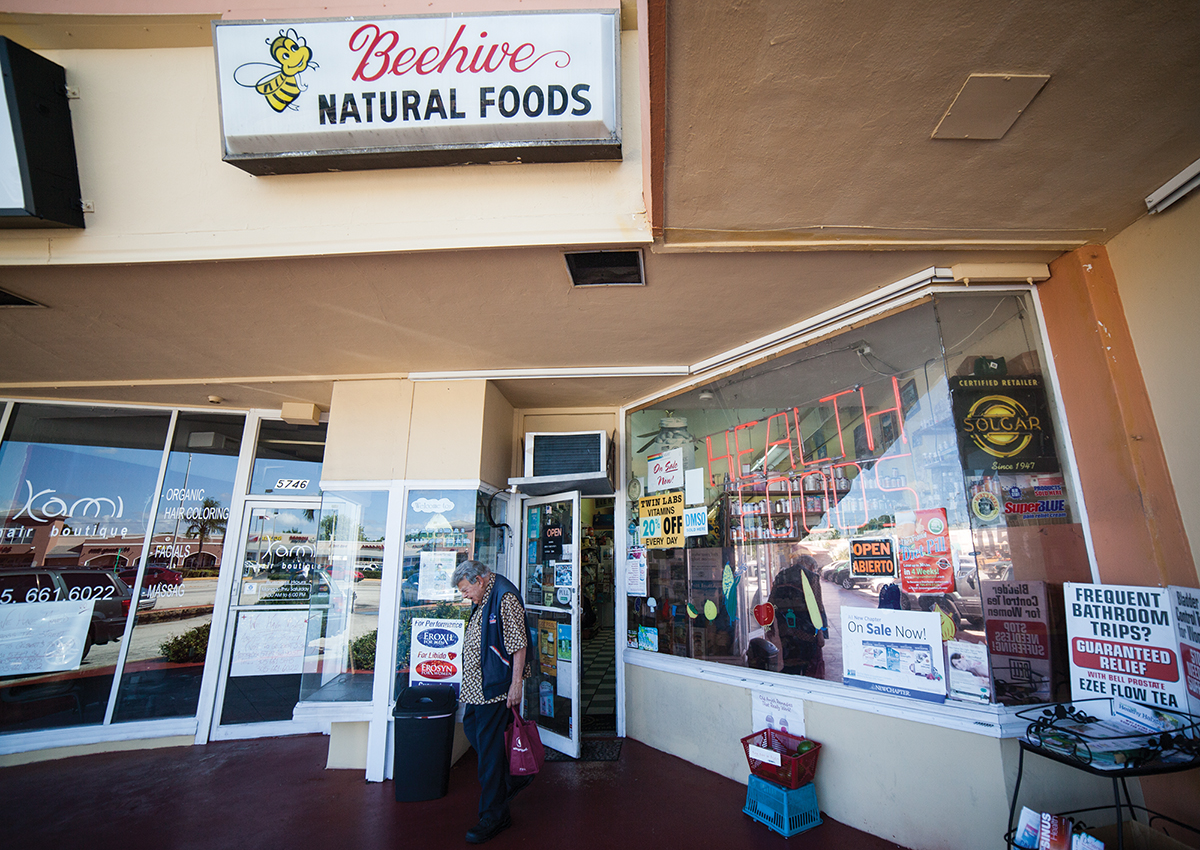 On an inconspicuous corner of a strip-mall about a mile from the University of Miami’s Coral Gables campus, Beehive Natural Foods sells supplements and snacks. At lunchtime, the Beehive Juice Bar in the back bustles with hungry regulars at its counter.

“Carlitos, I’m starving,” murmurs a woman whose young daughter is attached to her hip.

“Right away,” the chef answers devotedly.

The customers are craving  vegetarian and vegan fare like bean sprout burgers. Still, more than that, they crave Beehive’s sense of community.

Beehive has been an institution for decades. The storefront’s current owner, Bob Penna, has been with Beehive for 33 years. Carlos Schicchi has been running the juice bar for 23 years.

“People go to the Beehive largely because of my dad’s personality,” said Gabriel Schicchi, son of the Brazilian chef. “He’s there waiting for you, serves the food that he made himself, talks to you, makes a ton of bad jokes, but makes you want to come back.”

Both Penna and Schicchi are the reason that loyal patrons from the South Miami area, including many from UM, return to the health food establishment again and again.

But a man-made disturbance may disrupt this natural order at Beehive.

CVS Pharmacy has bought out the strip-mall on the 5700 block of Bird Road. Beehive Natural Foods and Juice Bar will be kicked out this coming January.

Several other small businesses, including students’ favorite 1909 Cafe, will be displaced as well.

Nearby Allen’s Drug Store, which is not directly connected to the strip-mall, will remain in its place. Walgreens already exists across the street, and CVS will make the third pharmacy in the immediate vicinity. Gabriel Schicchi considers this ironic.

“Part of the whole idea of a health food store and a juice bar is to not take pharmaceuticals and to try to find a healthy natural alternative,” he said. “It just figures that they would have to close because CVS bought the property.”

The 24-year-old also finds it unimaginable that his father’s long-loved natural haven in its current form is going to close.

“I’ve been there my whole life, and some of those customers have been coming in every day since I was 3 years old,” he said.

Senior Emily Northrop, who has been eating and shopping at Beehive since high school, is one of these regulars. She’s a flexitarian – someone who prefers vegetarian foods – and eats there monthly.

The juice bar has served many other students from UM, as well as professors, according to Schicchi.

“We see people from the law department – most of the professors come here to eat and bring their friends – to all kinds of engineers, scholars, professionals and regular people, too,” he said.

Better yet, all sorts of business partners were born over countertop conversation, and a few marriages have come out of the Beehive as well.

Customers also come to the health food store to seek out Penna’s expertise for their nutritional needs.

Penna even practices holistic healing at home with his 10 children. One of his sons, Matthew, is a sophomore at UM, and he worked alongside his dad at Beehive for most of his adolescence.

“Beehive definitely has a communal type of environment,” Matthew Penna said. “You have people going in for the juice bar … and before you know it, they’re buying some vitamins, and it works the other way around.”

It’s this kind of dynamic that Beehive customers and employees are hoping won’t be disrupted. The health food storefront has tentative plans to move to a larger location on Bird Road.

“I can’t wait for my customers to enjoy it,” Penna said. “… One of the things I definitely want to have is space to have seminars. We want to get everybody in the community involved.”

Meanwhile, Schicchi has not decided whether he will move his juice bar into Penna’s new store because the juice bar has taken on a life of its own.

“We need a bigger space to sustain that, and it’s also important that we acquire a kitchen inside of the operation,” he said.

Schicchi envisions opening a small restaurant, but that requires finding the right location and the funds.

“Right now we don’t know what’s going to happen,” he said. “It’s a big change, an emotional change, too.”