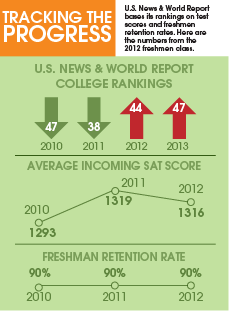 U.S. News & World Report ranked the University of Miami No. 47 in the 2014 edition of the “Best Colleges” list that was released Tuesday.

The university remains the No. 1 school in Florida, but dropped three places from last year’s rankings. In 2011, UM climbed nine spots, earning its highest ranking since U.S. News began publishing the lists in 1983.

“The University of Miami takes pride in the diversity, excellence and successes of our student body,” he said. “We have taken strategic steps to improve student selectivity, retention and graduation rates, all of which are reflected in the U.S. News and World Report.” UM’s average freshman retention rate is 91 percent and the four-year graduate rate is 69 percent, according to the report released by U.S. News.

Each college or university is ranked based on formulas that combine several measures such as graduation rates, standardized test score and student-to-faculty ratios.

The methodology made significant changes for the 2014 rankings. The weight given to high school class rank dropped from 40 percent to 25 percent because the proportion of high school students graduating with a class rank reported on their transcripts is falling, according to U.S. News.

The weight of SAT and ACT scores of the freshman class was increased from 50 percent to 60 percent.

The incoming freshmen class of 2012 had average SAT scores that exceeded 1300, and the percentage of students scoring between 1400 and 1600 increased from 24 percent to 26 percent, according to an annual report by the Faculty Senate Committee on Academic Standards. The average ACT score was 29.7.

“Student Government is proud that Miami is once again the top academic institution in Florida and that our school is continually striving for improvement and success,” she said.

“I wanted a school where I would have as much spirit as I wanted and know that I am getting a good education,” she said.

Zerpa feels that her decision might have changed if UM was not No.1 in Florida.

Senior Michael Anderson believes that prospective students should choose a school based on themselves and not the rankings. He believes people should consider UM’s reputation while finding employment in Miami.

“Just because a school is rated ‘X’ that does not mean it’s the school for you,” he said. “UM’s probably going to win every time you’re meshing degrees in Miami. It’s the best school by far in Florida.”