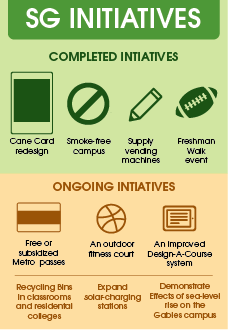 Completed initiatives include a redesign of Cane Cards, a smoke-free campus, a supply vending machine in Richter Library, outdoor seating at Mahoney-Pearson Dining Hall, blocking off the seal outside the bookstore and Freshman Walk, an event similar to Senior Walk, but instead freshmen took a lap around Sun Life Stadium’s field at the first home game of the season against Florida Atlantic.

During the spring election, the Power of U administration’s main three platforms consisted of the Freshman Leadership Council (FLC), allCanes Radio being moved to the Rathskeller, and fostering opportunities for students to intern abroad.

The team consisting of President Bhumi Patel, Vice President Justin Borroto and Treasurer Robert Chiste was inaugurated in April. In those first few months, they successfully passed the FLC during one of the last Senate meetings of the year and began immediate implemention.

“People are excited about [FLC],” Borroto said. “The things that we set precedents for now are kind of how the shape of it is going to look in the future. Making sure that the foundation of that is really strong is going to be my biggest thing.”

According to SG press secretary Adam Orshan, no updates were available regarding the latter two initiatives as of Wednesday.

Other ongoing projects include free or subsidized metro passes for students needing to travel to other campuses, an outdoor fitness court and a solid design-a-course system.

With other changes being implemented all over campus, Borroto is excited that SG is attacking their list of initiatives.

“[We’re] capitalizing off of all the energy off of campus … and bottling that up and running with it,” he said. “For all of the big ticket items, we have a game plan for how it’s going to go down or a good concrete foundation so that we can see it come to fruition by the end of the year.”

Additionally, the Eco Agency, led by Kamal Daghastani, is working on their own list of tasks for the semester.

“Our main group projects are Lucid, an energy-monitoring dashboard … recycling bins on campus, and trying to get education of sea level rise as well as different alternative energies on campus,” he said.

The team is working with administration to place recycling bins with informative stickers in each classroom and residential college by Thanksgiving. They also hope to expand their solar power charging stations, currently located outside of Richter Library, to gliders around campus. Additionally they hope to coordinate with the greater community of Miami on the High Water Line Project to showcase the effects of sea-level rise on the Coral Gables campus in December.

“This is our second year in existence, and the first year went amazingly well,” Daghastani said. “There’s a new shift in perception of sustainability, and a lot of students are coming in now with a lot of great ideas.”