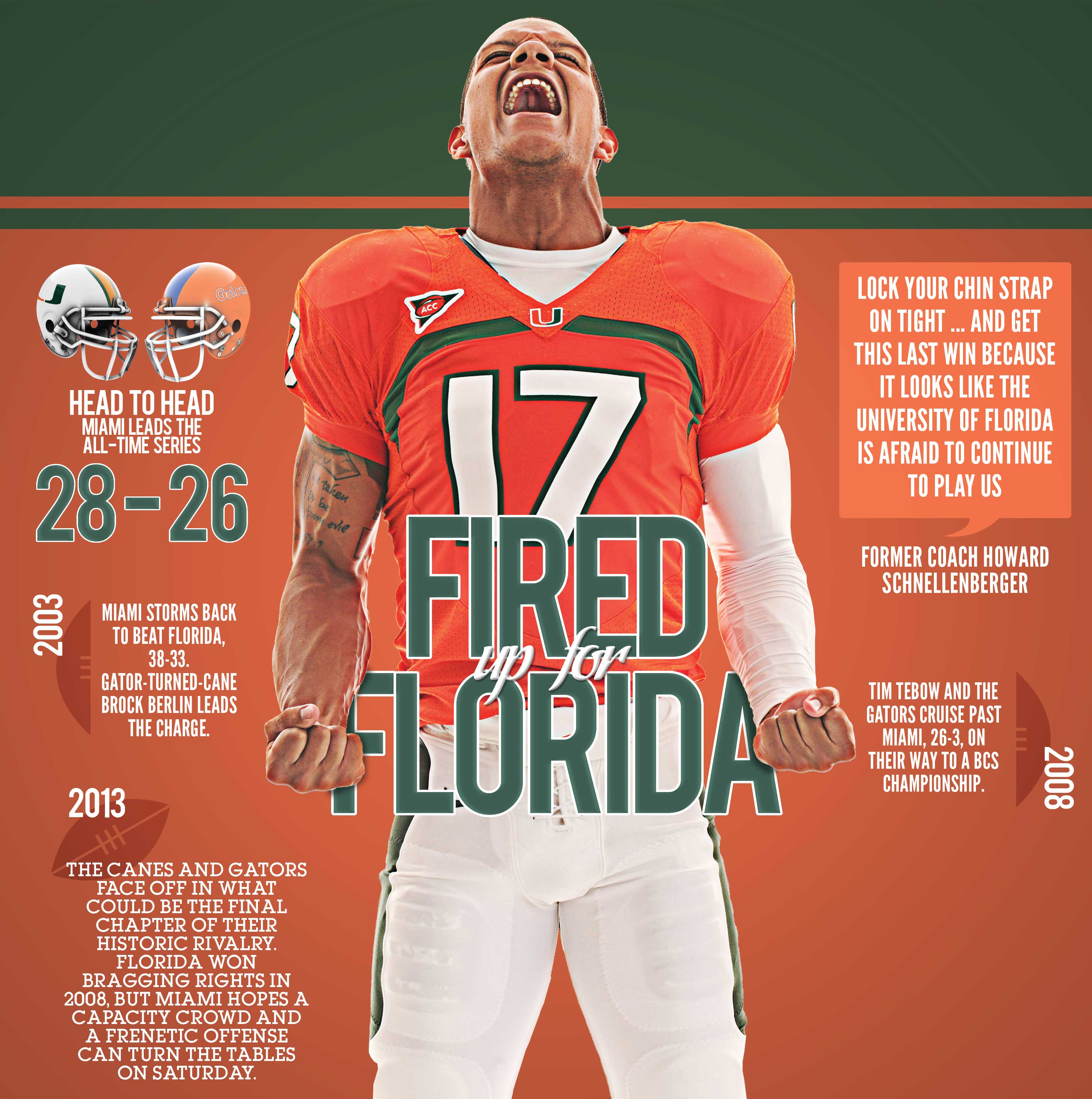 This Saturday is a day bound for greatness, the stuff of legend for anyone whose blood runs orange and green.

Caravans of Hurricane faithfuls will start their trek to Sun Life Stadium before the sun rises. This is the game they’ve all been waiting for.

The noon kickoff between Miami and Florida will mark the 55th series meeting. The Canes and Gators have not met since 2008, when quarterback Tim Tebow led Florida to a 26-3 victory and an eventual national title.

Miami has not hosted its upstate rival since a 2003 matchup at the Orange Bowl. Miami came away with the win – and bragging rights – in six of the previous seven games.

But head coach Al Golden insists the preparation for this weekend’s showdown has been pretty much ordinary.

“To be honest with you, it’s just about us getting ready right now, just going to work and taking care of business, and that’s the way it should be – getting your job done,” Golden said in a press conference on Tuesday.

Miami will look for sophomore Duke Johnson to have another explosive game from the backfield. Though Johnson has accrued 1,227 all-purpose yards in his last five games, the Florida defense is notoriously stingy against the run.

The athletic department launched a “White Out the Gators” campaign, asking all fans to wear white. Category 5 – the student spirit organization – will distribute 6,000 white T-shirts to students.

The shirts have an orange tie in signature Golden style, and also feature a pair of Sebastian the Ibis sunglasses. Students must attend a pep rally at 6 p.m. Friday at the UC Rock to receive a T-shirt.

It is advised that students find their seats at least one hour before the noon start.

The contentious Florida/Miami rivalry began in 1938. The teams played annually until 1987, when the Gators altered their non-conference scheduling.

Miami leads the series 28-26. The Hurricanes’ defense will have to slow down Florida’s collection of big-play receivers, including Quinton Dunbar and Solomon Patton.

“They’ve recruited really well at wide receiver, they’ve got some veterans, and that really makes an impact on games,” Golden said. “[Senior Trey Burton is] about as good as you can get as a receiver, wildcat runner, all the things he does. Our guys better be ready to cover them – and cover them deep – because they’re talented.”

The Gators dropped two places to No. 12 in the latest AP poll. Miami missed the top 25 in that poll, but burst into the coaches poll at No. 24, where Florida is No. 9.

“I think there’s trash talking at every game, but especially when you’re playing a rivalry game in the state of Florida, kids from Florida … I think it will be a big game,” he said.

But Morris, like Golden, maintains that Miami will approach Saturday like any other game on the schedule.

“I’m telling our guys in here just to treat it like a normal game because as soon as you start thinking, ‘Oh it’s a big game, this and that,’ then you’re gonna want to do things you’re not used to doing,” Morris said. “So our whole focus right now is to go out there and play our game, play our brand.”

The Hurricanes will aim to build on their momentum from last week’s season opener against Florida Atlantic. Miami accumulated more than 500 yards of total offense in their opening game for the first time since 2002.