Home » Starting the semester off right

Starting the semester off right

A strange phenomenon occurs when you’re a freshman in your first weeks here at UM: Various strangers wearing bright orange shirts catch you wandering around lost on campus – or in your dorm’s communal restroom – and survey you.

These strangers (you will later learn to refer to them as “other freshmen”) will each demand information from you, and if you’re not prepared for this never-ending onslaught of the same exact questions repeated forever until the end of time, you’ll want to throw yourself into Lake Osceola.

Thankfully, I have written an unsolicited guide to responding to the insatiable curiosity of your classmates.

“Where are you from?” Tell them the truth. They will likely follow up with, “Oh! Do you know my cousin [Name]?” Answer by saying “I love [Name]!” and continue lying. Always lie. Never don’t lie.

“Stanford or Hecht?” There is an annoying, imaginary rivalry between the two freshman residential colleges, so if you answer this truthfully and the surveyor grunts or expresses any other form of mindless negativity, say “Oh wait. Actually, yeah, it’s the other one. Whoops.”

“Do you smoke weed?” Even if you do, Just Say No. You never know who is working for UM’s secret police.

“Are you gonna rush?” Tell whoever this genius is that you don’t know what that means. After the future frat star explains, say, “No.”

“What’s your major?” This is it. This is the one. This question is an unstoppable force of nature. Answering this gets very tiring, very fast – so just have fun with it. Make up fake majors each time you’re asked, such as ‘Planet Engineering,’ or ‘Anime Studies.’

“Who’s your roommate?” Stare intensely and respond, “My roommate? Why, perhaps it could be you … For a price.” Lick your fangs, transform into the bat you truly are, and soar into the night sky, laughing at the chaos we call life.

Adrian Alonso is a sophomore majoring in creative writing.

Obama’s loan plan: too little, too late
Explore what Miami, campus can offer 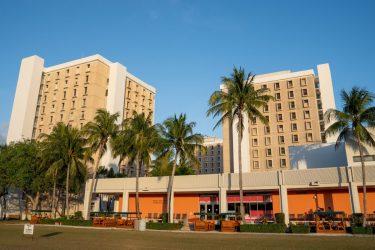