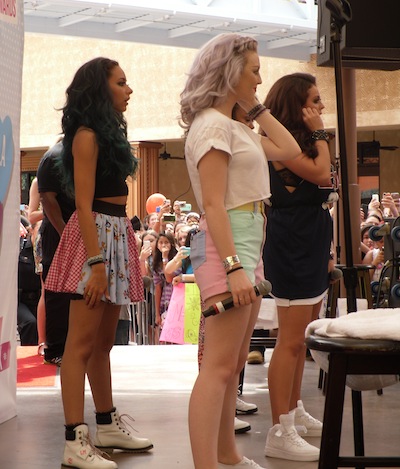 The girls – Perrie Edwards, Jesy Nelson, Leigh-Anne Pinnock and Jade Thirlwall – made a stop in Miami while traveling across the U.S. to promote their debut album, “DNA.” They have already held meet and greets in several cities, including Boston, New York City and Rochester.

Little Mix will continue their U.S. promotion tour in June, visiting Chicago, Detroit, San Francisco and Los Angeles. They will also perform on “Good Morning America” on Friday as part of the TV show’s summer concert series in Central Park.

The girl group, which won “The X Factor UK” in 2011 (the first group to do so), held a contest for fans where the winning country would be awarded with a promotional tour including signings and meet and greets. The U.S. won the competition and Miami brought in the most points. Miami Mixers were awarded with a signing as well as a performance.

Little Mix sang several songs off their album during the gig, including “Wings,” “How You Doin’” and “DNA.” Their incredible vocals and fun choreography pumped the crowd up despite the bad weather. The intimate setting let them connect with their fans easily.

The girls seemed to enjoy hanging out with their Miami Mixers. Thirlwall Tweeted from the group’s account (@LittleMixOffic): “Wow the biggest signing we’ve done thanks Miami mixers!” They also Tweeted pictures of some of the gifts fans gave them at the signing, including hats, posters and friendship necklaces.

Little Mix’s album is available in stores and on iTunes now. The girls’ single, “Wings,” was recently released in the U.S. as well.

For more information, check out the group’s official Twitter at @LittleMixOffic or visit little-mix.com/gb/home.