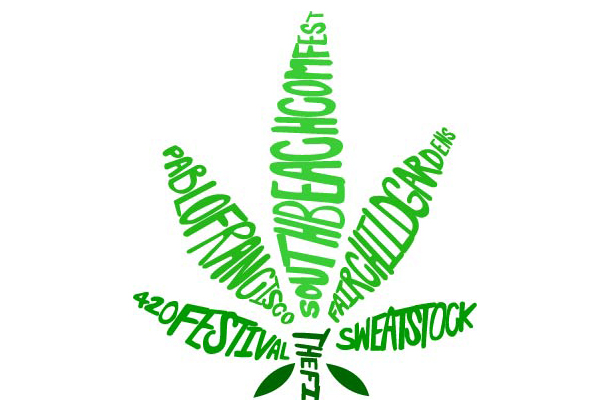 Celebrating 4/20 may be synonymous with marijuana and aimed at stoners, but that doesn’t mean that you have to spark up a joint and sit around all day to enjoy it.
Luckily, this year it falls on a Saturday and is full of music, food, green and laughs. Here are our picks for the top six events happening on 4/20.

Sweatstock
Sweat Records will host the fourth annual Sweatstock music festival and block party in honor of Record Store Day and the shop’s eighth anniversary. Sweat will open at 9 a.m. and have exclusive music releases to celebrate. The party starts at noon and keeps going until 2 a.m.

The festival will have three stages and promises a day full of music, food and vinyl. Otto von Schirach, ANR and Beatmachines are just a few of the performers who will play at the festival. While there, make sure to munch out on local favorite food trucks, like Ms. Cheezious, GastroPod and Veggie Xpress.

This is an all ages event. Sweatstock is located at 5505 NE Second Ave.

The festival also features a beer tasting. Starting at 11 a.m., the Spring Beer Tasting Garden will offer ciders, ales, lagers and more tasteful brews for festivalgoers.
Want to learn how to make a savory tomato and pesto goat cheese tart? The weekend is filled with gardening and chef demonstrations. Check out the demonstration at noon on Saturday led by Chef Derek Hernandez.

Fairchild invites festivalgoers to discover their edible garden filled with herbs, vegetables, fruits and ornamentals. Fruit tastings will take place both days from 9:30 a.m. to 3:30 p.m. There will be a Farmer’s Market with local vendors selling their homegrown goods.
If you want a tour of the gardens, you’re in luck. The 75th anniversary walking tours will take place on both days at 11:30 a.m.

Fairchild Tropical Botanic Garden is located at 10901 Old Cutler Road. The festival is free for Fairchild members, but $25 for adults who aren’t members.

The Annual 420 Festival in Tobacco Road
The city’s oldest bar and restaurant is hosting its annual 420 party. Music starts at 10:30 p.m. and continues until 2:30 a.m. Some of the performers of the night will be Jahfe, Stokeswood and Blowfly. Entrance is free before 9 p.m. Presale tickets cost $5, and tickets at the door cost $10. This event is for ages 21 and older.

Pablo Francisco at The Improv
If you’re looking for a night full of hilarious jokes and spot-on impressions, check out famous comedian Pablo Francisco’s stand-up act at the Miami Improv. The MADtv comedian will put on a show at 8:30 p.m. and 10:45 p.m. Both shows are for ages 18 and older. Tickets cost $22 and don’t include the two-drink minimum per person at the venue.

South Beach Comedy Festival – Lincoln Road Free Stage
The great thing about being in Miami on 4/20 is that the South Beach Comedy Festival is going on. These events cost money, but there will be a stage set up on Lincoln Road for you to catch comedians doing stand-up to the public for free. The comedians performing Saturday are Sarah Tiana, Sean Donnelly, Brooks Wheelan, Michael Che and Chris Distefano. The acts begin at 9 p.m.

Lincoln Road Free Stage will be located at Euclid Avenue and Lincoln Road.

Australian comedian and the most brutally honest person alive, Jim Jeffries, will perform stand-up after Silverman. His FX show, “LEGIT,” just finished its first season. Doors open at 10 p.m. and the show begins at 10:30 p.m. Tickets are $48.
The two comedians are part of two separate performances.
The Fillmore is located on 1700 Washington Ave.