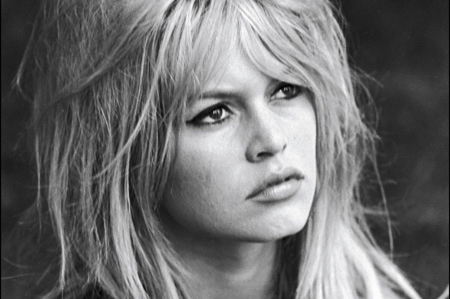 “Adored not only as an actress, but also as a fashion icon, recording artist and international sex symbol, Ms. Bardot’s star image extends beyond the big screen,” Zulueta told the audience March 28 at the first of  two screening sessions for “Ms. Bardot: Liberated Post War Sex Symbol and Style Icon.”

Zulueta chose the film “Come Dance With Me” to kick off the series. After the screening, viewers discussed the importance of Bardot.

“I hadn’t seen her films before this, but knew who she was,” freshman Rori Kotch said. “After watching the film, though, I can see how she revolutionized how women are portrayed in films with her natural undone beauty.”

The second part of the mini-series will screen Thursday, showcasing two of Bardot’s other films, “Her Bridal Night” at 7 p.m. and “Mademoiselle Striptease” at 9 p.m.

Zulueta’s project is a part of a larger series hosted by the Norton Herrick Center for Motion Picture Studies called “Out of the Vault: European Cult Classics.” In this series, Ph.D. candidates in the cinema department are invited to curate films in the Herrick archives that didn’t get a lot of exposure.

“There are 3,500 titles of movies, and there is a library with outdated technology that we’re in the process of digitizing,” said professor Christina Lane, the center’s director.

The Herrick archive, which was acquired by the School of Communication in 2010, has a variety of films including old films and what some may call “B” films.

“These films aren’t usually critically acclaimed, and we are discussing their cultural and historical value,” said Trae DeLellis, director of Cosford Cinema operations.

Zulueta chose the films he’s screening from the collection because they highlight Bardot in her early, rarely-screened, pre-Nouvelle Vague (French New Wave) movie roles. Nouvelle Vague films were films made by young French directors such as Jean-Luc Godard in the 1950s and 1960s.

“With her rebellious attitude and rejection of social constraints, B.B. [Bardot] anticipated the rise of the French New Wave film movement,” Zulueta said. “She signaled the advent of a newly emancipated woman that would soon herald a cultural revolution whose effects would leave an indelible mark on cinema forever.”

Bardot began her acting career in 1952, but her breakout role came in “And God Created Woman” in 1956. Bardot was best known for her relaxed style and natural beauty.

“A lot of UM students don’t know much about her, but she was bigger than Angelina Jolie during her time,” Lane said. “It’s interesting to take a look back to reappraise her symbolic value in today’s perspective because she was powerful in the days before second-wave feminism in the 1970s.”

Bardot retired from acting in 1973 and has rarely been in the spotlight since then.

“We didn’t get to see her age since she shied away from the spotlight, kind of like Greta Garbo,” DeLellis said. “Other stars like Marilyn Monroe and James Dean died young, and she didn’t have that. So she had to shy away.”