Workers and supporters stage rally on anniversary of MLK’s assassination 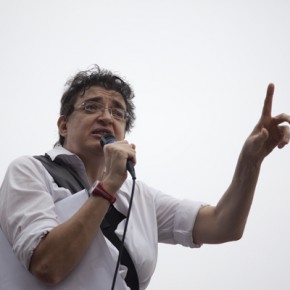 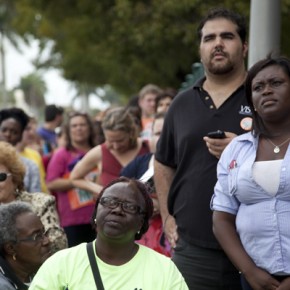 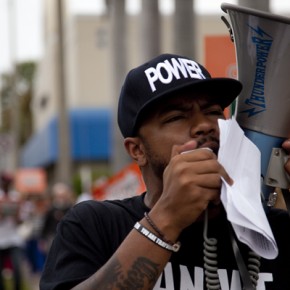 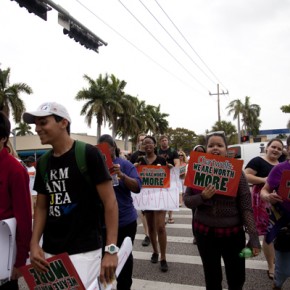 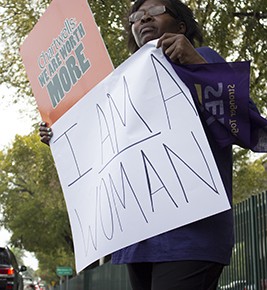 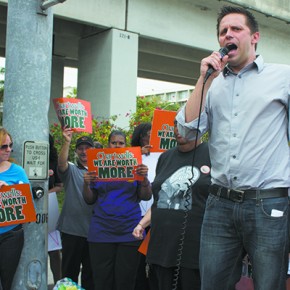 University of Miami’s low-wage workers — along with students, faculty supporters, and members of several pro-union and workers’ rights organizations — gathered at the intersection of Stanford Drive and U.S. 1 on Thursday afternoon in protest of what they claim to be unjust treatment against Chartwells workers on campus.

Chartwells is the company in charge of most food service at the university.

“Some workers make as little as $10,000 a year and rely on public assistance. It’s simply not enough,” said Muhammed Malik, communications director for 1Miami, a union-support group.

According to Mailk, the university is the largest private sector employer in the region. Thus, it has a responsibility to set the standard on how workers should be treated, he said.

The day of the rally itself was significant, marking the 45th anniversary of the assassination of Dr. Martin Luther King Jr., and was a prevalent theme throughout the rally. The fight for workers’ rights is being made in King’s spirit, who at the end of his life was marching with sanitation workers, according to Malik.

The activist stood alongside U.S. 1 holding signs saying “We are Worth More” and the iconic civil rights placard “I am a Man,” chanting “Yes We Can.”

At the rally, fliers were distributed with the salaries of head football and basketball coaches Al Golden and Jim Larranaga, Dean of the Medical School Pascal Goldschmidt, and President Donna E. Shalala — all of whom earned more than $1 million in 2010 — to make a point about inequity in the university.

The rally received support from respected figures in the arena of workers’ rights, such as Cornell West, professor-activist at Stanford University, and Florida State Senator Arthenia Joyner, who both issued statements about the rally.

A concern that has been voiced is the harassment of Chartwells workers by their managers.

“They wore buttons saying ‘We are Worth More’ and all the managers went around saying, ‘If you don’t take that off, you’re going to get in trouble,’” said Eric Brakken, director of the Florida District at the Service Employees International Union (SEIU), another organization advocating for unionization.

Braken said that this type of treatment is detrimental to all parties involved because “they’re trying to get up, and when they do, they get pushed down by their company.”

A statement from Media Relations at the University of Miami regarding the dispute addressed this point: “We strongly request both sides to abide by the rules, which most importantly, includes no harassment or intimidation of workers.”

The statement also said that the university is not taking a position but reiterates that forming a union is an option available to all workers.

One group on campus that is familiar with workers rights disputes and having success is the UNICCO workers. Seven years ago they were faced with similar issues that Chartwells workers are facing today.

“We are here to support them in their struggle to unionize, the same struggle we fought for back in 2006,” said Clara Vargas, a UNICCO employee.

Vargas, who went on a hunger strike back in 2006, said that is what it took for the UNICCO workers to receive better wages and to unionize. She hopes it does not need to happen again.

The Chartwells workers and their supporters efforts have achieved success, however, in the case of Betty Asbury, a line server at the dining hall at UM.

Asbury, mother of a former Hurricanes basketball player and better known as “Ms. Betty,” was fired on Oct. 10 from her position at the Hecht-Stanford Dining Hall after a man walked past her without paying for entry into the dining hall.

With staunch support from students, faculty and co-workers, Asbury was rehired and received three weeks pay back.

Asbury said her struggle is not over, however. She said that it is important for the Chartwells workers to be able to go to work without fear.

In a demonstration of faculty support and solidarity, 205 faculty members signed a petition in support of the Chartwells workers, drawn up by Simon Evnine, professor of philosophy.

“We are here to make sure they get a fair wage,” Evnine said. “They’re getting paid terribly under living wages.”

Giovanna Pompele, who teaches women’s and gender studies, said that the university is sending a mixed message by teaching one thing in the classroom, equality, and practicing something completely different.

“I walk in to my classroom everyday and teach equality and then my students walk out of my classroom and walk into the cafeteria and food court and do they see equality? Do they see what I am teaching them?” she said.

Pompele said that Chartwells is a business, and it will try to do what is most financially lucrative for itself. Thus, in terms of who holds responsibility, it is not up to the company to stand up for its workers but rather the people who employ Chartwells.

“UM asks a company to bid for a contract for food services, trying to bargain for the best price,” he said. “When it does that, it chooses whichever company pays the workers the least.

Supporting the workers is what the university can do, Brakken said.